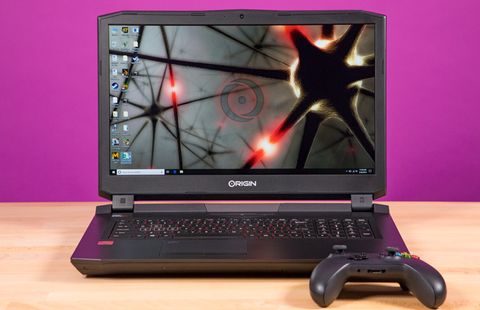 The Origin PC Eon17-X is a monstrously powerful gaming laptop with customizable configurations and a price tag to match.

Just like their desktop counterparts, boutique laptops can be built with everything but the kitchen sink. The Origin PC Eon17-X starts at $2,026, but we reviewed it at $3,879 with a desktop Intel Core i7-8700K CPU, 16GB of RAM, a Nvidia GeForce GTX 1080 and a custom print on the top lid. And while our 144Hz G-Sync display is considered impressive, we didn’t even see the most expensive model, which has a 4K screen. This is a laptop to go for if you want to customize it to your liking and the option of desktop CPU power, but you’ll have to deal with a dim screen and loud fans.

Your first impression of the Eon17-X will be highly based upon how you order it. For free, you can get a red, black or white design with Origin’s logo, but ours was spiffier. It features one of the company’s HD UV printed designs. In our case, it was a red polygonal pattern, and these designs cost an extra $149. Unfortunately, our pattern came a bit chipped and unevenly applied around the edges, which is a shame especially because a consumer would have paid extra for it.

When you lift the lid, you’ll find the 17.3-inch, 1920 x 1080 G-Sync display surrounded by a fairly thick bezels. There are two speakers directly below it. The RGB keyboard has black keys and rests on a black, deck which gives it a uniform, inoffensive look.

The Eon17-X is thick, but at least that means you get a ton of ports. On the left side are an SD card slot, a pair of USB 3.1 Type-A ports, a USB Type-C port, a Thunderbolt 3 port and an Ethernet jack. On the right you’ll find headphone, microphone, audio in and audio out jacks, as well as a pair of USB 3.1 Type-A jacks and a Kensington lock slot. On the back are a pair of Mini DisplayPorts and an HDMI output.

The Eon17-X’s Nvidia GeForce GTX 1080 GPU with 8GB of VRAM can power through most modern games at High settings. When I played Middle-earth: Shadow of War on Ultra settings at 1080p, it ran between 90 and 100 frames per second (fps) as I took on a bunch of orcs who caught me sneaking around their fortress.

Origin’s laptop ran the Rise of the Tomb Raider benchmark (1080p, Very High) at 74 fps, overcoming the premium gaming average (63 fps), as well as the Blade Pro, the Alienware and the Titan.

It also powered through Hitman (1080p, Ultra) at 128 fps, beating the average and surpassing the rest of the pack.

If you have an HTC Vive or Oculus Rift lying around, the Eon17-X will have no problems powering it. It earned a perfect score of 11 on the SteamVR performance test.

Armed with an Intel Core i7-8700K desktop-grade processor, 16GB of RAM, a 512GB M.2 PCIe SSD and a 2TB HDD, the Eon17-X can handle productivity with aplomb. I had 25 tabs open in Google Chrome, including one watching a 720p stream of Dead by Daylight on Twitch, and, no surprise, it ran smoothly.

On Geekbench 4, the Eon17-X earned a score of 24,869, handily surpassing the premium gaming average (19,534), as well as all of the competition, including the Blade Pro, which has a lesser 7th generation Intel Core processor.

The laptop took nine seconds to copy 4.97GB worth of files, a rate of 865MBps. That’s faster than the average and each of the laptop’s competitors.

Origin’s notebook also beat the rest of the test group in our Excel macro test, pairing 65,000 names and addresses in 31 seconds, ahead of the 43 second average.

On Handbrake, in which the laptop transcodes a 4K video to 1080p, the Eon17-X needed seven minutes and 58 seconds to complete the task. While that beats the average of 9:59, the Titan was faster at 7:41.

While the 17.3-inch, 1080p G-Sync panel on the Eon17-X is colorful, it’s not as bright as some of its competitors. When I watched the trailer for Shazam!, the red color in Billy Batson’s hoodie and on the titular hero’s uniform really popped. The yellow lightning bolt on Shazam’s costume was also extremely vibrant. But in a few darker scenes, like in a dark parking lot, I wish I could have made the screen slightly brighter. Similarly, when I played Middle-earth: Shadow of War, I could make out the many different shades of gray in Talion’s cape, but the game appeared a bit dark.

The screen covers 116 percent of the sRGB color gamut, which beats the Alienware (110 percent) but falls short of the 131 percent premium gaming average and other competitors.

The machine measured an average of 264 nits of brightness, falling short of of the average (278 nits) but proving brighter than the Titan (257 nits).

While many others have chiclet keys, Origin uses a traditional-style keyboard. With 1.6 millimeters of key travel that require 68 grams of force to press, the keys are comfortable, though the plastic is a bit slippery. I reached 107 words per minute, which is squarely average for me, but with a four percent error rate, up from two percent.

The keyboard is RGB backlit, and you can adjust the colors in three zones.

The touchpad has Windows 10 precision drivers, and it reacted instantly to my swipes and taps, including four-finger gestures. My only issue with the fingerprint reader, which takes up part of the pad; I’d rather see that sensor elsewhere on the deck.

The Eon17-X is loud and proud. When I listened to Kendrick Lamar and The Weeknd’s “Pray For Me,” the vocals and synths easily filled the biggest conference room in our office. I could make out the bass, though I would’ve preferred that it thumped a little harder. During my time playing Middle-earth: Shadow of War, swords clanged loudly and orcs grunted clearly. Sometimes, though, the battles overpowered the music.

The laptop comes with Sound Blaster Connect, with different profiles for games and music, as well as the ability to tweak by hand. Bumping up the bass improved audio performance a a bit, though the music profiles mostly just emphasized voices.

The Eon17-X comes apart in sections. The battery, for instance, pops out when you pull two latches, no screws required. The main compartment requires that you remove five Phillips head screws. That’s where you’ll find the MXM module for the GPU, as well as the socketed CPU under cooling. There are also two SODIMM slots, neither of which were filled in our review unit.

Once you remove two more screws, you can access the storage. The 512GB M.2 PCIe-NVMe SSD can be replaced by removing a single screw. We had one HDD in the hard drive bay, but there’s another empty space for a SATA drive in case you decide to upgrade your storage.

Like many a gaming PC, the Eon17-X didn’t last long on our battery test. The test, which continuously browses the web, streams videos and runs a graphics test at 150 nits of brightness ran for two hours and 19 seconds before the laptop’s battery ran out. That’s shorter than the premium gaming average of 3:28.

When it’s not gaming, the Eon 17-X’s heat is manageable. After streaming 15 minutes of HD video from YouTube, it measured 81 degrees Fahrenheit on the touchpad, 98 degrees between the G and H keys and 93 degrees on the keyboard.

While I played Middle-earth: Shadow of War, the keyboard jumped to 93 degrees and the bottom of the machine hit 125 degrees. The touchpad didn’t change.

The fans, however, run loud whether you’re gaming or just doing productivity tasks. You may want to consider investing in a pair of headphones.

The Eon17-X’s FHD webcam is passable but not color accurate. In a photo I took with the camera at my desk, my blue plaid shirt appeared green-ish, and my skin tone was on the warm side. But you could still make out loads of detail like the hairs on my head and our office’s horrible popcorn ceiling.

Our review unit came totally clear of extra software, including most of the bloat that comes in builds of Windows 10. A program called Control Center lets you change between several pre-programmed device profiles, turn CPU and GPU memory overclocking on and off and control fan speeds.

The only other programs of note include Sound Blaster Connect to customize audio and Killer Control Center to change which programs get network priority. Several of these apps are hidden in folders, so you may have to dig around to find them.

Origin’s configurator is chock full of options between those specs. There’s also a whole bunch of other customizations, including choices for networking, warranty options, an extended dead pixel guarantee and shipping choices. You can also pay more for a 4K option if higher resolution is more important to you than faster refresh rates.

With both a beefy GPU and a powerful desktop processor, the Origin PC Eon17-X is a strong gaming machine with loud audio and a ton of configuration options. However, the display is dimmer than on some competitors, and the fans run loud.

But where it gets tough is value proposition. As is the case with many boutique machines, much of the added cost comes down to personalization. Only you can decide whether UV printing is worth $149.

The best alternative is the Alienware 17 R5, which has a noticeably better screen. Its Core i9-8950HK processor isn’t as fast as the desktop Core i7 on the Origin, but for a similar price ($3,299) you get better software with Alienware’s Command Center and can still load it with up to 32GB of RAM.

But if personalization and all-out performance is what’s most important to you, splurging on Origin’s customized notebook will squeeze out some extra frames.