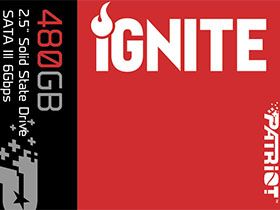 Asynchronous flash allows companies to shave a few dollars off of the MSRP. The Ignite brings a powerful controller down a price tier but don't think this bargain is premium performance SSD at a low price.

DRAM and NAND flash are made by the same companies, which work with other partners to produce the final retail hardware we buy for our computers. Those relationships help explain why some of the RAM vendors were first to introduce consumer-oriented SSDs. Patriot was one of the early providers of desktop solid-state drives, and the company has a long history of offering low-cost products.

Without a fab, Patriot has to rely on other companies to manufacture the NAND memory and controller technology it uses. Flash went through a dry spell for a while, where partners experienced reduced allocation. Moreover, the post-SandForce era saw controller development slow to a crawl. Patriot nearly bowed out of SSDs altogether due to those challenges and more. But a small (yet steady) demand for its existing drives kept the company active. New SSDs were simply few and far between.

That cooling-off period is now over thanks to a budding relationship with Phison. Patriot recently released three consumer SSDs: the Blaze, Torch and Ignite series, the latter of which we're testing today.

The Patriot Ignite uses Phison's quad-core, eight-channel PS3110-S10 controller with smart ECC technology. It features end-to-end data protection and a host of other capabilities typically found in enterprise-class processors. The S10 was designed for both two-bit (MLC) and three-bit-per-cell (TLC) flash. To ensure low-endurance TLC can survive typical consumer warranty periods of three years or more, the controller uses powerful error correction technology to read bits that may have shifted over time. When a powerful controller like Phison's is paired with higher-quality MLC flash, it can handle other background activities that make the drive faster.

Phison's S10 controller employs an eight-channel interface to the flash. A quad-core design seems excessive, but allows the company's customers to dedicate processing power to flash management, which maintains respectable performance at high speeds, even under steady state conditions. The controller also brings some enterprise-class features to the consumer realm like end-to-end data path protection that uses CRC/ECC to protect data as it moves from the host to the controller, flash and DRAM.

Patriot's performance specifications are lower than Corsair's Neutron XT, another product using the S10. The difference between them is their flash. The Ignite employs IMFT 16nm asynchronous NAND to keep its price low.

Phison still hasn't enabled all of the S10's features. DEVSLP works and takes power down to 10mW, but a future update is expected to reduce it even further to 5mW. Another planned update focuses on 4KB steady state performance. We hear the S10 is capable of delivering over 10,000 random write IOPS, but optimizations are still in development. Plus, there is no guarantee that Patriot will enable extra features, should they become available.

Following its tradition, Patriot worked to keep the Ignite's price down. We found the 480GB model for as low as $180. The 960GB version goes for around $370. Understandably, the Ignite doesn't come with a large bundle; you pretty much just get a paper manual in the retail box. Patriot does cover its Ignite with a three-year warranty, though.