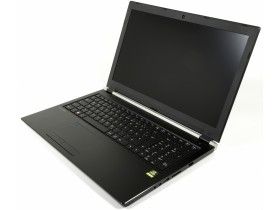 Power use varies depending on whether you're plugged into the wall or using the battery. But since we can't modify this sample, we're only able to measure between the mains socket and power supply. Thus, the following table is limited to consumption on mains power.

Our tests include several scenarios, including sleep mode. The stress test is rather theoretical in nature; you'll never replicate it using real-world applications.

Real-life measurements, even for something like a larger SolidWorks workload, make it obvious just how important power-saving technologies are to stretching out battery life. Still, don't expect to run demanding applications away from the wall for any length of time.

Even though CPU and graphics performance is dramatically reduced on battery power, taking consumption down a notch, there's only so much capacity to keep this platform running. We keep its display on the normal brightness level across all workloads except the stress tests, where we max it out.

Once we completely deplete the battery, it takes less than two hours to fully recharge it, assuming you don't use the notebook during that time.

Clevo employs three fans in this design, similar to its original P955 platform. The graphics module's thermal solution consists of three flattened heat pipes connected to a sink with two radial fans, while the considerably more economical CPU gets by with two heat pipes and one radial fan. Noise generated by both subsystems under load is quite audible.

We even pick up a low humming sound when the PrevailPro is idle and charging. Higher-quality coils for the DC-DC converters would have helped there.

From 50cm away, our equipment registers approximately 40 dB(A) through a battery-powered SolidWorks benchmark run that pushes 2D/3D, compute, and rendering. This is an acceptable result.

But the almost 46 dB(A) we measured from the same run at higher clocks (plugged into the wall) is a bit too much. The experience is all the more uncomfortable as the keyboard above and your legs below start heating up.

Under maximum load, the notebook gets up to almost 50 dB(A), which is easily enough to drown out any other equipment in your office. The three fans spinning as fast as they can definitely take a toll. After all, up to 150W of energy converted into heat in a compact enclosure has to be dealt with one way or another.