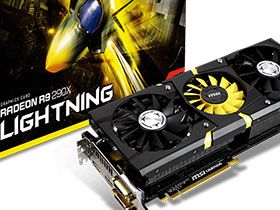 Meet The Largest, Heaviest Radeon R9 290X Of All

Based on the size of its R9 290X Lightning, it appears that MSI has a thing for overkill. But the company might also be onto something. As we already know, cooling AMD's Hawaii GPU properly is what separates the men from the boys. Forget about re-purposing cooling solutions from other cards. Asus tried that and it didn't go over well at all. Instead, MSI sent over a three-slot take on the Radeon R9 290X, which, as you can see, employs a trio of cooling fans and a lot of metal dedicated to keeping that hot graphics processor operating within its comfort zone.

This thing isn't a toy. A $700 price tag, tied for the most-expensive Radeon on Newegg, makes you think hard before dropping nearly $150 more than the cheapest models with aftermarket cooling.

Even the Lightning's box is massive; it includes an extra compartment with lots of accessories and a certificate of ownership. You're dealing with a limited-edition piece of hardware, after all.

The snazzy-looking board and high-end packaging (not to mention lofty price) naturally have us expecting quite a bit out of MSI's R9 290X Lightning. Historically, the company reserves this branding for its flagship models. Does this board live up to that standard? It's time to break out the lab gear and find out.

The number of accessories you get with this card is impressive, though we question the wisdom of including 6-to-8-pin adapter cables. Why solder eight-pin plugs to the card and then encourage users to fry thinner cables that might not be suitable for driving a high-end GPU? The same goes for the bundled Molex adapter. Who in their right mind would make up the balance of too-few cables by tapping into a pair of four-pin plugs? We've woken up to the smell of smoke in the morning; it's not fun. Seriously. We expect folks who buy $700 graphics cards to use similarly enthusiast-oriented PSUs.

Beyond the manual and CD (which contains the drivers, MSI's Afterburner software, and a fan control utility for the three fans), the box contains a metal plate, thermal pads, and screws. The plate fits over the DC-DC converters when you embark on an extreme overclocking mission, go the water cooling route, and remove the massive heat sink.

Lab Note about the Dimensions

The dimensions reported here don't necessarily match the manufacturer's official technical specifications. Rather, we measure them by hand to assure they're correct. The image and chart below should help illustrate what each measurement actually means. Auxiliary PCI Express power connectors are not included; they have to be added depending on the power plug and cable design.

MSI's R9 290X Lightning is as long as the Sapphire R9 290X Tri-X. However, it monopolizes three expansion slots, and is a tad higher, too. As a result, we're fairly certain it's the bulkiest Radeon R9 290X we've tested thus far.

The weight of a card might be interesting if you're trying to figure out if any additional support is needed, or to calculate the amount of stress your motherboard might be under in a CrossFire-based setup. Since MSI's offering is by far the heaviest in this field, we want to emphasize the importance of bracing it somehow, even if you're only able to use cable ties.

Next Page Features And Pictures
37 Comments Comment from the forums