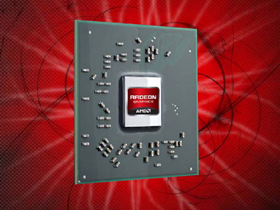 Here we were just saying not to expect AMD Radeon HD 8000-series graphics cards until later in 2013 in Best Graphics Cards For The Money: December 2012, and the company sends over its Radeon HD 8790M. Cool, right? We haven't even reviewed a desktop-based 8000-series card yet.

Well, not so fast. AMD does currently offer mobile graphics processors based on its Graphics Core Next architecture. However, those are limited to the high-end of its Radeon HD 7700, 7800, and 7900 families. Everything in the 7600-series and lower centers on the company's VLIW5 shader configuration, which you last saw make news on the desktop when it launched the Radeon HD 6800 series in October of 2010. So, yeah. It's high time that AMD starts nudging the far superior GCN architecture and 28 nm manufacturing into mainstream and entry-level mobile designs.

What's up with the name, then? Call it carry-over inflation from the Radeon HD 7000M line-up, which also mixed multiple architectures. The take-away, right up front, is that even though we're previewing a Radeon HD 8790M, this isn't the 8000-series you're expecting on the desktop. Rather, it's AMD's effort to get GCN into the mobile space, an exciting-enough prospect in its own right, given that small, lightweight notebooks stand to gain quite a bit from an energy-efficient design able to bolster performance significantly.

We're not particularly happy about the model confusion, as we've pointed out many times in the past. But AMD didn't leave itself much room to roll out GCN-enabled Radeon HD 7000M-series parts. And besides, Windows 8 is here. OEMs want to see shiny new names to go along with their latest models.

Those marketing shenanigans don't diminish AMD's claim that the Radeon HD 8000Ms are going to be quite a bit faster than the VLIW5-based GPUs they replace. On the desktop, we saw the Radeon HD 7000-series add-in cards not only improve performance appreciably, but the GCN architecture also helped ratchet up efficiency and improve the company's standing in more general-purpose compute workloads. Equally impressive were the speed-ups AMD's driver team managed to coax from GCN after the architecture's introduction. We expect that GCN-enabled mobile parts to wield the same benefits, plus enjoy a more mature driver (including a fixed implementation of its switchable Enduro technology, which was recently patched to address a frame rate-limiting bug).

If you've heard rumors about the Venus and Mars parts, and thought they had something to do with the desktop, then you'll be surprised to learn that those are the code names for two mobile GPUs. Venus is one component, while Mars is divided into three families, all equipped with 384 Stream processors, but operating at different clock rates.

AMD does plan to turn features on and off to differentiate its new GPUs, too. For example, the Mars-based Radeon HD 8790M we're previewing does not include support for the company's Video Codec Engine (VCE). Conversely, the Radeon HD 8800Ms, armed with Venus, are expected to include VCE functionality to speed up video encoding and decoding in hardware.

While we would have loved to start by taking a look at one of AMD's Radeon HD 8800M GPUs, the Radeon HD 8790M is its first mainstream GCN-based graphics processor ready for testing. In fact, the company hasn't even started announcing OEM design wins yet.

You'd think that would make it hard to benchmark the Radeon HD 8790M. However, we have a bit of hardware in the lab that should allow us to draw a comparison between AMD's next-generation mobile line-up and the one it replaces. The interposer card in the image below drops into a PCI Express x16 slot, and accommodates an MXM module. AMD and Nvidia use these things in their own labs during the bring-up process. They make it possible to do all of the testing needed before an OEM integrates a GPU into its own notebook design.

The interposer solves some problems, even as it introduces others. Let's start with its advantages.

First, and perhaps most important for the scientifically-minded out there, it allows us to maintain a common test platform. Were we to instead benchmark notebooks from competing vendors against each other, we'd have to take different processors, thermal limits, clock rates, memory capacities, and motherboards into consideration. This way, the only things changing are the MXM modules. Moreover, getting our hands on these components allows us to test weeks or months before OEM notebooks start shipping.

Conversely, we're painfully aware that dropping mobile hardware into a desktop environment ignores many of the constraints OEMs face when it comes to integration. We don't get a sense for thermal output or battery consumption during a 3D workload. That makes it easy to create an unrepresentative comparison. See the heat sink on the 8790M? It's quite a bit larger than the 7670M's cooling solution. Could we be facing a match up that never pans out in the real-world? Perhaps, though a 28 nm processor and proven-better efficiency give the GCN-based part headroom that the prior-gen part doesn't enjoy. When we first started this evaluation, AMD told us we were working with a Radeon HD 8770M, and that it was as close to a drop-in replacement for the 7670M as you'd find, matching its TDP. But after GPU-Z indicated that we were dealing with a Radeon HD 8790M, the company corrected itself and confirmed the higher-end part, operating at 850 MHz with a 900 MHz boost state available.

There's no way for us to be certain that the previous-gen part, the part we originally thought we'd be testing, and the 8790M we actually have in the lab would all work in the same notebook, or if their respective thermal and power attributes would preclude one or more from sharing compatibility. So, we're hedging our bets by not involving Nvidia in this discussion, and recommending that you consider the performance we're presenting as a comparison between two distinct models in AMD's line-up, which you wouldn't necessarily find in the same chassis.

The specs on the Radeon HD 7670M match what we are expecting. GPU-Z doesn't fully recognize the 8790M, but it does pick up its maximum 900 MHz boost clock.