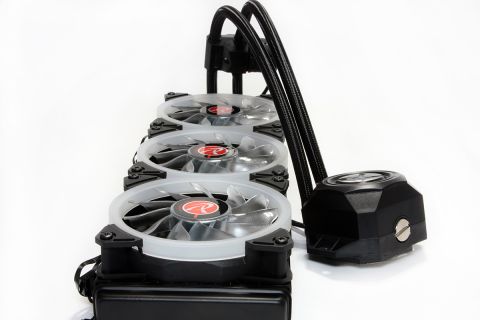 With great RGB-lighting options, low noise levels, and competitive pricing versus other 360mm AIO coolers, the Orcus 360 is a handsome option for a large liquid cooler.

Raijintek has expanded its Orcus AIO cooler line to include a whale of an offering--the Orcus 360--worthy of the family name. As the "360" suggests, it makes use of a large, 360mm-class aluminum radiator as its primary heat exchanger. The Orcus 360 looks similar to most AIO coolers on the market, but a closer look reveals a bit more than might meet your eye at first.

For one, most closed-loop liquid coolers do not have a coolant fill port, simply because of what they are: designed to remain a closed system requiring no user maintenance. Raijintek, however, has designed the Orcus 360 with a fill port on the side of the CPU cooling block. The included instructions mention the possibility of topping off the cooler, but our sample was completely filled, and upon shaking the radiator, it was evident that no air pockets were in the loop. We have some mixed feelings about including a fill port on a product that should never need servicing; it could create a problem, in the form of the cap not being secured if it were to be opened.

The Orcus 360 comes boxed with an assortment of mounting hardware for most current and relatively recent Intel and AMD processor sockets. (AMD's Threadripper is not supported at the time of this writing.)

The key accessories bundled with the Orcus 360 are a bottle of coolant, a powered RGB hub, and an RF remote for color control. The RGB hub uses a small switch to toggle between motherboard synchronization and control using the handheld remote. Motherboard RGB integration allows you 16.7 million colors to choose among, while the RF remote allows cycling through several color options. You will need to pick up your own CR2032 coin-cell battery for the remote; none comes included with the cooler hardware bundle. This is a strange omission, considering that most coolers that provide a remote will also include the necessary battery.

The Orcus 360 uses a unique form of in-line axial-bearing pump that's mounted directly on the tubing of the cooler itself, rather than on the CPU component block or the radiator. Raijintek states that this is to reduce the vibration and noise level, and to lessen the stress on the motherboard and the CPU. The pump is PWM-capable, and the wiring lead is sleeved in black nylon braid. The pump itself has a rubber protection grommet that fits snugly over the rounded top to muffle sound and protect the pump housing from damage.

The CPU-block component has an embedded flow-meter wheel and an acrylic viewing window to monitor coolant flow. Embedded RGB lighting also provides backlit ambiance to match the rest of your chosen color scheme. The Orcus 360 fill port has a nickel-plated brass cap, located on the opposite side of the swiveling flex-tubing ports, while the reinforced mounting base is integrated into the bottom of the CPU block fixture.

The copper CPU mounting plate of the cooling block is nickel-plated, which is then polished to a glossy, mirror-like finish. Raijintek states that the block’s internal structure uses advanced micro channels and a 0.1mm fin design for optimal flow and surface area.

Many closed-loop liquid coolers make use of some form of RGB LED lighting and control. But for most of these coolers, the lighting is built into the fan hub itself. Raijintek has opted to use its own 1800 RPM, hydraulic-bearing PWM fans; these have RGB lighting beneath an opaque ring at the circumference of the fan blades themselves. This allows for the LEDs beneath to glow vividly, casting a broad profile of ambient color throughout the chassis.

The cooler mounting and setup process was simple enough when following the enclosed documentation. The illustrations and brief descriptions are easy to understand and provide enough data to accomplish the task.