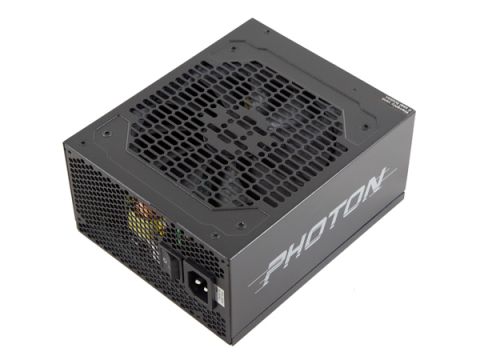 Using the previous page's results, we plotted a chart showing the Photon-1200's efficiency at low loads, and loads from 10 to 110 percent of the PSU's maximum-rated capacity.

The Photon-1200 isn't very efficient under light and normal loads, at least not for a Gold-rated PSU. This is something we expected, given the outdated platform. If you need higher efficiency and less noise, you'll have to spend more money.

In the following tests, we measure the efficiency of the Photon-1200 at loads significantly lower than 10 percent of the device's maximum capacity (the lowest load the 80 PLUS standard measures). The loads we dialed were 20, 40, 60 and 80W. This is important for representing when a PC is idle, with power-saving features turned on.

Efficiency under light loads is mediocre. However, that's not the only bad thing about this unit. If you take a look at the fan noise column in the table above, you will see that its biggest weakness is noise, again, even under very light loads. We should note that we tested at an ambient temperature around 40 °C. Still, we expected much lower noise levels in this section.

Efficiency on the 5VSB rail is just terrible. We strongly believe that high vampire power consumption is the cause of this rail's poor efficiency.

Phantom power is well above 0.5W, meaning that this unit isn't ErP Lot 6 2013-compliant. However since it isn't sold in the EU, it doesn't have to be. Nonetheless, the less power wasted, the better. And in this case, increased power consumption at standby leads to poor 5VSB efficiency as well.

The first chart below illustrates the cooling fan's speed (RPMs), and the delta between input and output temperature. The results were obtained at 40 °C (104 °F) to 49 °C (120.2 °F) ambient temperature.

The next chart shows the cooling fan's speed (RPMs) and output noise. We measured acoustics from one meter away inside of a small, custom-made anechoic chamber with internals completely covered in sound-proofing material (be quiet! Noise Absorber kit). Background noise inside the anechoic chamber was below 18 dB(A) during testing, with ambient temperature at the levels noted above.

The following chart illustrates the fan's output noise over the entire operating range of the PSU. The same conditions of the above graph apply to our measurements, though the ambient temperature was between at 28 °C (82.4 °F) to 30 °C (86 °F).

Even with normal operating temperatures the Photon-1200 is noisy. Rosewill and Sirfa should offer a more relaxed fan profile, especially at lower loads. If you want to build a silent PC, you should refrain from buying this PSU.

Prev Page Load Regulation, Hold-Up Time And Inrush Current Next Page Cross-Load Tests And Infrared Images
7 Comments Comment from the forums
Be In the Know