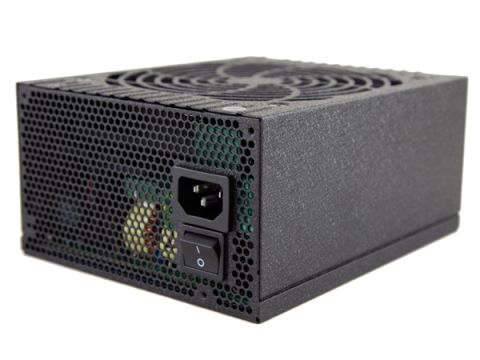 Rosewill's Quark PSU is made by Enhance Electronics--a good OEM, but one we don't often encounter in our reviews. The platform is definitely cutting-edge, with an LLC resonant converter on the primary side and synchronous rectification (SR) and DC-DC converters on the secondary side. Also, all of its electrolytic capacitors are made by Japanese manufacturers. In addition, a massive heat sink cools down the APFC converter's switchers along with the primary switchers. This heat sink will surely lighten the load of the cooling fan, at least on the primary side.

At the AC receptacle, two X caps and a pair of Y caps form the first part of the EMI filter, while on the main PCB we find two more pairs of X and Y caps along with a couple of CM chokes and an MOV. There is also a CM02X IC on the solder side of the main PCB, which is responsible for blocking the current through an X cap's discharge resistor when AC voltage is connected. In addition, the bridge rectifiers are installed between the enormous primary heat sink and a much smaller heat sink. Close to them is a sizable NTC thermistor that provides protection against large inrush currents. A relay bypasses this thermistor once the APFC caps are fully charged in order to provide higher efficiency.

In the APFC converter, two Infineon IPP50R140CP FETs are used along with a single CREE C3D10060G boost diode. The pair of bulk caps is made by Nippon Chemi-Con (450V, 390uF each, or 780uF combined, 2000h @ 105 °C). We believe that their combined capacity is on the low side, so they won't be able to provide the hold-up time that’s defined by the ATX spec. The APFC controller is a Champion CM6502, which is most likely supported by a CM03X Green PFC controller.

There are four main switchers (Infineon IPP50R190CE) that (we believe) are arranged into a full-bridge topology. The LLC resonant controller is a Champion CM6901 IC, which operates the main switchers at PWM mode with light loads, while at higher loads it uses FM modulation. The main transformer is pretty small for a unit of this capacity and it's nearly surrounded by three heat sinks that have nothing bolted on them; these heat sinks play a key role since they dissipate heat from the MOSFETs underneath them. These MOSFETs (8x International Rectifier IRFH7004PbF) regulate the +12V rail and, in addition to the above heat sinks, are also cooled by the PSU's chassis through a thick thermal pad. Finally, two thermistors are attached to the fins of one of the +12V sinks with the help of heat-shrinks. One of them provides data to the fan control circuit, while the other one is used by OTP (Over-Temperature Protection).

The standby PWM controller is a STR-A6069H IC, and the SBR that rectifies the 5VSB rail, a PFR10V45CT, is right next to the 5VSB transformer.

At the front side of the modular PCB, some polymer Duratech caps, along with two small electrolytic Chemi-Con caps, provide extra ripple filtering. On the back of the same board, the soldering quality is very good.

Besides the supervisor IC (SITI PS223), which supports OTP out of the box, we found several other interesting components on the main PCB, including a pair of Lite-On optocouplers, two Silicon Labs Si8230BD gate drivers and four shunt resistors under the +12V islands. This is an indication that with the proper modifications (since the PS223 supports OCP for up to two +12V rails) this platform can support OCP for up to four virtual +12V rails.

The cooling fan is made by Young Lin Tech and its model number is DFS132512H (135mm, 12V, 3W, 1820RPM, 91.16 CFM). It uses a Riffle bearing, so it will last for quite a long time. However, it is quite noisy at higher speeds and the fan profile isn't as relaxed as we expected it to be, given this unit's high efficiency and large heat sinks.