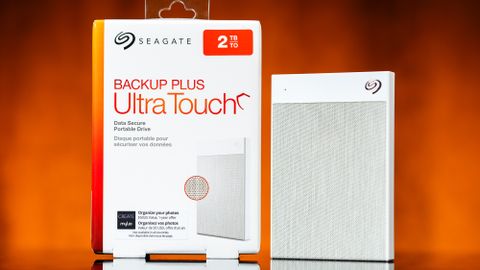 In our testing, we're pitting the Seagate Backup Plus Ultra Touch against a variety of external SSDs and HDDs that use Thunderbolt 3 and various USB interfaces. Closest to the Seagate is the LaCie Mobile Drive (LaCie is a brand owned by Seagate), which is a pricey metal-clad 5400RPM external HDD and also included are results against the LaCie 4TB Rugged RAID Pro, which utilizes two 2.5” HDDs in RAID 0. Next, we’ve taken out the 1TB SanDisk Extreme Portable SSD and 480GB Kingston HyperX Savage EXO, both much pricier SATA-based solid-state drives. As well, we included a 1TB G-Technology G-Drive Mobile Pro for some Thunderbolt 3-based competition to stir things up a bit. There's no way the trio of hard drives is going to compete with the collection of SSDs, but it's always good to have comparison numbers to show why people opt for solid-state storage, aside from the increased ruggedness that comes from a lack of any moving parts.

Alongside the LaCie Mobile Drive, the Seagate Backup Plus Ultra Touch lands at the bottom when transferring files. During the Photo and Documents transfers, the Seagate drive hit ~100MBps and peaked at 122MBps during the Movie transfer. Read performance also ranks it last or second-to-last. With an average read speed of 120MB/s, its rather sluggish compared to our flash-based competitors.

Seagate’s Backup Plus Ultra Touch achieved an overall score of 2178 points and averaged a bandwidth rate of 8MBps here. This score ranks it second-to-last on our charts and goes to show just how much of a practical and sizable difference there is in application performance between a spinning disk and something of the solid-state flavor.

In ATTO, the Seagate Backup Plus Ultra Touch lands in last place, with transfer speeds of up to 144MBps read and 148MBps write.

On average, Seagate’s Backup Plus Ultra Touch ranks last overall. During sequential transfers, performance peaked out at 132MBps read/write. Seagate’s Backup Plus Ultra Touch boasts random read latency that comes in at ~8.8ms read and 3.5ms write. This results in an IOPS throughput of 113 IOPS read and 286 IOPS write, which is just a fraction of what something like the SanDisk Extreme or other SSDs are capable of. And, scaling out to a QD of 4 or even 128 doesn’t improve performance much, but rather just exaggerates latency.

Write speed and temperature are two important and inter-related metrics for external devices. We tossed in this one last test to measure the performance of the drive over a 15-minute window. When possible, we also log the temperature of the drive via the S.M.A.R.T. data to see when (or if) thermal throttling kicks in and how it impacts performance. For SSDs, this test also reveals if the drive has a pseudo-SLC cache, which is a small portion of faster-programmed flash that absorbs incoming write workloads. Keep in mind that results will vary based on the workload and ambient air temperature.

Under a straight 14 minutes of write time, Seagate’s Backup Plus Ultra Touch managed to write just over 109GB of data. Surprisingly, this outshines the LaCie Mobile drive significantly, by nearly 30GB. Still, it pales in comparison to its flash-based solid-state competitors.

Over the course of writing the data, we logged the highest temperature of 37C, which is rather low.