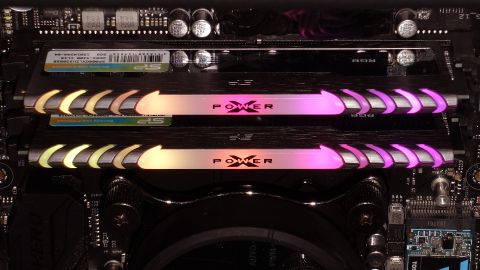 A recent entry into the enthusiast DRAM market, Silicon Power did solid work to produce its P/N SP016GXLZU320BDB DDR4-3200 kit. With the same type of lifetime limited warranty, similar pricing, and a performance edge so miniscule as to be inconsequential compared  to its closest competition, buyers will probably pick their brand based on aesthetics. On that front, you should of course go with what you like, but the XPower Turbine makes a strong case for itself in the looks department, too.

Silicon Power put its toe in the door of the enthusiast DRAM market just a few months ago, so it will probably forgive us for thinking of it as a storage device firm. So new is its XPower Turbine RGB DDR4 that the firm didn’t even have boxes printed for its 2x 8GB kit when it sent our samples. The package inside still had space for two DIMMs however, and an updated photo from one of its sellers shows that the lack of dual-channel-kit packaging has since been resolved.

What you’ll get in a single¸slightly revised version of the above boxes are two DDR4-3200 DIMMs with mid-tier CAS 16 timings, each topped with a white light diffuser and wrapped in a brushed aluminum heat spreader, for around $92 USD. Unfortunately, it’s not currently available for a realistic price in U.K.

The full set of  primary timings are 16-18-18-38, and the modules require 1.35V to assure those timings are stable at its DDR4-3200 XMP. Buyers who suddenly find out too late that their boards can’t support that XMP will still get a reasonable DDR4-2666 configuration, and those who figure out too late that their Core i3-8350K is limited to DDR4-2400 should be pleased to note that the modules are also programed for that. While these fallback settings are all superior to the DDR4-2133 offered by some of Silicon Power’s competitors, we still think it best to figure out what your hardware can support before ordering new parts.

Silicon Power does not provide any download links for RGB software, but instead relies on applications provided by motherboard makers to support their own RGB lighting. Aura Sync, RGB Fusion, Mystic Light Sync and Polychrome Sync are all listed as compatible, and the Aura Sync for our motherboard worked as expected.

XPower Turbine RGB falls only slightly behind our top DDR4-3200 C16 overclock. DDR4-3600 should be easy for most of these kits to reach, apart from the Delta Tuf Gaming RGB, and the three top contenders all reached at least DDR4-3733.

We excluded DDR4-4000 from our benchmark results since none of these kits could reach it. The lowest (quickest) stable timings for the XPower Turming RGB are like those of the Adata and Aorus kits, apart from the Adata kit’s ability to run DDR4-3466 at C16 rather than C17.

XPower Turbine RGB edges out its competitors by ultra-narrow margins in F1 2015 and 7-Zip, which are our two benchmarks for which memory performance has the greatest impact.

With the performance race so close that nobody could likely be bothered to chose any of these kits based solely on that metric, aesthetics and pricing will likely drive their buying decision. We added our recently-tested DDR4-3200 C14 results to the performance baseline just to show how narrow the margins are for kits priced around 60% higher.

The big loss comes to Aorus RGB Memory, since the kit we tested last year is still stuck with last-year’s pricing. Of course the Aorus kit also has the aesthetic benefit of including two dummy modules (to make all four slots appear filled), but at this price most users could simply by two of the other kits and bump up from 16GB to 32GB in the process.

As for the XPower Turbine RGB, it costs $3 more than the cheapest kit in a value chart where that small a difference can still impact outcomes. Of course, most buyers will spend at least $5 to get the kit that best matches their preferred appearance, and for RGB buyers the XPower Turbine RGB could be a treat.