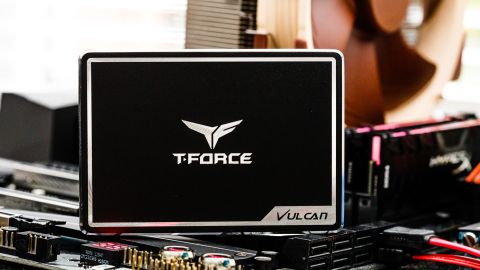 Today we’re comparing the Vulcan to a few other SATA and entry-level NVMe SSDs. As SATA competitors, we include the WD Blue 3D, Samsung 860 EVO, and the Crucial MX500. And, for good measure, we threw in an Adata XPG SX8200 Pro, Crucial P1, and WD Blue SN500 M.2 NVMe SSDs, as well as a 6TB WD Black HDD.

Team Group’s T-Force Vulcan did very well in this test. With a total load time score of 20.3 seconds, it is a split-second slower than the MX500, but faster than the Samsung 860 EVO. It ranks in 5th place overall. Opting for a faster NVMe SSD can help improve load time, but it is of less benefit doing so than going from an HDD to any SSD.

The Vulcan is the fastest SATA SSD in the bunch here. With a read rate of 501 MBps and a copy rate of 221 MBps, it delivers performance that is twice as fast as an HDD, but half the performance of entry-level NVMe SSDs when moving around files.

Team Group’s T-Force Vulcan scored extremely well in PCMark 8 as well. Surprisingly, it ties the Samsung 860 EVO and outclasses the Crucial MX500. It even outranked Crucial’s P1. But, most importantly, it absolutely destroyed the HDD’s result. With a total overall score of 5,002 points and an average bandwidth of 304 MBps, it ranks third overall.

Once again, the T-Force Vulcan surprised us with a very impressive score that ranks it as the fastest SATA SSD on these charts. This time around though, Crucial’s P1 outranks it once again. An overall score of 1.98 places the Vulcan in fourth place overall.

The Vulcan delivered average results for a SATA SSD here. Sequential speeds of 563 MBps read and 527 MBps were recorded. This pales in comparison to the kind of speed NVMe SSDs can provide, but that extra speed does usually come at a higher cost per GB.

Sequential write performance is quite impressive on the T-Force Vulcan. It wrote at an average rate of 525 MBps, very consistently. It ranks third on overall in write performance. It managed to best some of the best SATA SSDs available and almost surpassed the Adata XPG SX8200 Pro. It may have if the test went on for a longer time.

We use the Quarch HD Programmable Power Module to gain a deeper understanding of power characteristics. Idle power consumption is a very important aspect to consider, especially if you're looking for a new drive for your laptop.

Some SSDs can consume watts of power at idle while better-suited ones sip just milliwatts. Average workload power consumption and max consumption are two other aspects of power consumption, but performance-per-watt is more important. A drive might consume more power during any given workload, but accomplishing a task faster allows the drive to drop into an idle state faster, which ultimately saves power.

When copying files around, Team Group’s T-Force Vulcan is the most-efficient SATA SSD of this bunch. It ranks fourth overall, falling behind the Crucial P1. Average and maximum power consumption results are well regulated and actually lower than the MX500’s. Idle power consumption, however, doesn’t drop below 410mW, unlike other SATA SSDs that go down to as low as 26mW at idle.