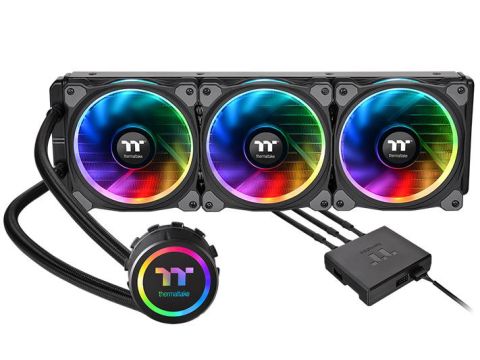 Bigger is usually better in cooling, but not when it comes to names. If you were to ask a family member for this as a holiday gift, would they even be able to remember the words Thermaltake Floe Riing RGB 360 TT Premium Edition? They might get the Floe Riing part right, apart from the spelling, and buy you a kinetic toy. If you’re lucky, they might get you any other variation of liquid CPU cooler with the word “Floe,” or “Ring,” or “360” in it. Perhaps you should just message them? No wonder people who remember life before smartphones lament that we never talk!

Henceforth abbreviated as Floe Riing 360 TTPE, Thermaltake's big RGB cooler certainly gives us a lot to talk about. It’s RGB, and if you don’t like that you can even turn the feature off. You could even leave the controller out of the circuit if you never plan to use its RGB features, but for those buyers the non-RGB version with its 33% lower price would probably make more sense.

Since fan connectors are proprietary, I only included the three that interface the PC in the specs. Those are: a 3-pin connector for the pump, a 9-pin internal USB header interface with outputs for two controller hubs, and a 3.5” FDD power cable connection.

Did I just say FDD? Thermaltake also includes a 5.25” FDD to 3.5” FDD adapter cable for buyers who don’t know what the smaller standard looks like. We’re referring to the same LP4 connector that powered most ATA drives and was developed by AMP, hence my hesitance to call the larger connector anything other than an ATA power cable (though I’m sure Molex is also a fine company).

The box includes the radiator, three special 9-pin fans, a five-device controller hub, mounting brackets for Intel square-ILM interfaces and AMD rectangular-spaced mounts (both legacy and AM4), standoffs to support all those brackets, a lock ring to hold the brackets onto the head unit, fan and case mounting screws with washers, and the adapter cables discussed above.

The controller hub supports up to five devices, including RGB control for both the pump and fans, and fan control. A set of switches allows users to set a device ID from 1 to 16 on the controller hub. We don’t have an answer for anyone who would like to run more than 80 Riing devices.

The head unit appears to be a standard Asetek part, right down to the smoothly lathe-cut CPU interface and factory-applied thermal paste. Tabs on the mounting bracket fit up through slots on its sides, and turning the bracket aligns its tabs to corresponding tabs on the base. A plastic ring can then be pushed up through some of those same slots to lock the bracket, if desired.

Installation begins by screwing standoffs either into the threaded brackets of your LGA 20xx or AMD motherboard, or the backplate nuts of your earlier AMD board, or the 115x/1366 backplate included with the Floe Riing 360 TTPE. The head unit is then placed with the ends of its mounting bracket over the standoffs, and secured with thumb nuts.

The finished installation looks great, with controllable color patterns as well as the full RGB range of solid colors available.

One thing we didn’t find instructions for was how to control the RGB lighting of the pump top. The Riing Plus software suite defaults to Riing Plus control mode for all devices, yet the pump cover is not one of those devices (probably because it has fewer LEDs). Changing it to “Floe Riing RGB” mode from the drop-down menu at the top gave us Wave, Full Lighted, Copy Color, Sound Control (3 styles), Thermal (color changes with temperature), Cross, Flow, RGB Spectrum, Ripple, Blink, and Pulse patterns to match the fans.

Next Page Comparison Hardware, Evaluation & Conclusion
7 Comments Comment from the forums
Be In the Know