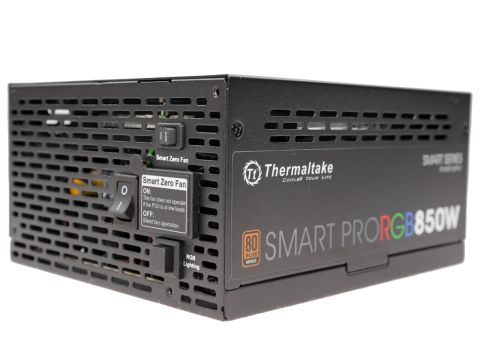 A good overall performance PSU at a fair price, considering the RGB lighting and the fully modular cable design. Nonetheless, we suggest you invest a few more bucks and get a higher efficiency PSU which will save you some money on the long run, and on top of that it will harm less the environment.

Thermaltake's Smart Pro RGB family includes three members covering capacities between 650W and 850W. With the exception of RGB lighting, which is just a fancy feature that doesn't affect performance, all three Smart Pro RGB models are based on a mainstream platform that scores low on the 80 PLUS and Cybenetics ETA scales.

The reason behind Thermaltake's entry-level efficiency rating is lower production costs, allowing the company to achieve competitive pricing. Of course, RGB fans are more expensive than non-lighted ones, but TT apparently thought it'd be nice for value-oriented enthusiasts to have flashy-looking PCs, too. We tend to think that every penny should be spent on improving performance, especially efficiency, rather than wasting money on handsome looks. But most marketing departments disagree.

The 850W Smart Power Pro RGB is more of a mid-range product than a mainstream one. Besides its RGB lighting, the SPR-0850F-R also features fully modular cabling, an HDB fan with specially-designed blades for increased static pressure, and a semi-passive mode. That last feature is a rare option for low-efficiency PSUs, which endure greater thermal loads, even under less stressful conditions.

TT promises good ripple suppression and load regulation within 3% on all rails. Of course, we'll verify this with our tests. The bulk capacitor is provided by a Japanese manufacturer, as is often the case. However, there is no mention of the other capacitors, so we're assuming they come from non-Japanese sources. But as long as the filtering caps are provided by Taiwanese manufacturers, we don't have a problem.

This is an 80 PLUS Bronze-rated power supply. According to the Cybenetics program, it achieves ETA-S efficiency and LAMBDA-S+ noise levels. Thermaltake says the maximum operating temperature for continuous full-load operation is 40°C, even though the ATX spec recommends 50°C.

All of the requisite protection features except for UVP are enabled, including OTP.

Finally, the provided seven-year warranty is ample, especially for an 80 PLUS Bronze-rated PSU. As we all know, the lower the efficiency, the higher the thermal load, which of course affects reliability. That's the main reason more entry-level power supplies have shorter warranties than efficient high-end PSUs.

MORE: Power Supplies 101
MORE: Picking The Right Power Supply: What You Should Know
MORE: Is 80 PLUS Broken? How To Make It A More Trustworthy Certification

The single +12V rail drives up to 70A maximum current output, and the minor rails are capable as well, offering up to 140W of combined power. Finally, the 5VSB rail is sufficient for today's demands.

This is a fully modular PSU, and the length of its cables, as you can see in the table above, is adequate. The same goes for the distance between connectors. All of the connectors use 18-gauge wires except for the FDD adapter, which uses thinner wires since it handles a lot less current.

Next Page Packaging, Contents, Exterior & Cabling
Be In the Know