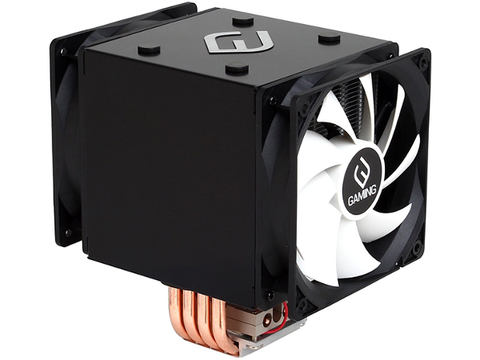 V3 Components has but one component, the Voltair cooler, that it hopes will provide the cooling power of a liquid cooler without the associated risk from leaks. That kind of comparison ignores that we’re using liquid when we can to reduce the alternative risk of a cooler breaking the motherboard. Experience tells us that the odds of a big air cooler either breaking a board or coming loose during shipping are far greater than that of a closed-loop-liquid cooler causing damage from leaks. Even the worst of our closed-loop systems leaked so slowly that its coolant dried before it even touched another component, but perhaps V3 Gaming was thinking of vented open-loops?

Three ounces heavier than Noctua’s NH-D15, the D15 is Voltair’s most significant competitor in today’s test. Both coolers have the same associated risk of weight, and neither have any coolant to leak. The Voltair has the potential benefit of a TEC element, while the NH-D15 has the proven benefit of larger fans.

The V3 Voltair also has the benefit of a huge price drop over the past few months that make it cheaper to buy than the NH-D15. That reduced price gives it the value win in spite of its mid-pack performance, and its narrower width (compared to the NH-D15) could help it fit into more systems.

On the other hand, its TEC element didn’t appear very effective at reducing our CPU temperatures. It ran hotter than the NH-D15 and made more noise. Yet there’s always the chance that an overclocked Haswell-E processor wasn’t what V3 had in mind, and the TEC it chose might simply be too small. We did a quick unplug/replug test and found that the Voltair’s TEC alone requires 68 to 74 watts, for what that’s worth. That’s a fairly low load by extreme cooling standards, but with a fairly high impact on system efficiency. If deciding between big air with or without TEC, we’d rather pay the extra $15 for the NH-D15 and make it up in savings on our electric bills.

MORE: All Cooling Content
MORE: How To Build A PC: From Component Selection To Installation