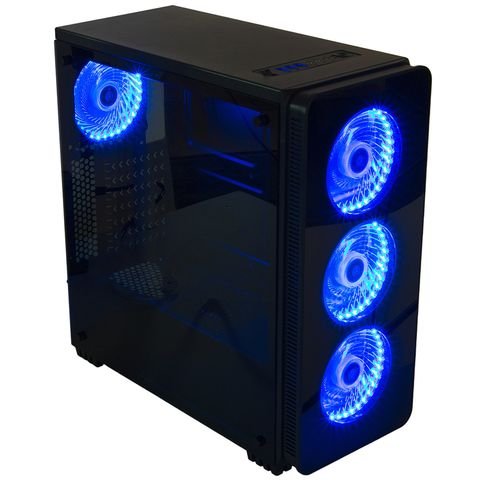 Cables include a USB 3.0 that occupies both ports but only connects to one, USB 2.0, a split power LED cable, HDD LED/Power/Reset, HD Audio, and a 4-pin ATA style connector for the fan controller. The 3-pin fans can also be connected to motherboard headers, but doing so sacrifices fan controller function.

ATX was originally specified in inches, and AC-97 was specified from ATX, yet many geeks refuse to be tied to a standard fictitiously based on the length of a king’s finger (and factually based on, of all things, barleycorns). Outside of former British colonies, the alternative scale appears to be a more of an inconvenience than an annoyance.

Unfortunately, there are sometimes issues with metric conversion, such as when a ½” cable header (12.6mm) gets converted to 13mm and ends up being 13.12mm. The test motherboard has a shield around its USB 2.0 header that measures 12.84mm-wide, which is more than enough clearance to fit a 12.6mm connector. 13.12mm doesn’t fit. Everything else fit, although after installing eight screws we had to loosen all eight and wiggle the board to install the ninth. Perhaps something else got lost in the conversion?

There’s a great deal of space for liquid cooling components even though the case isn’t designed to hold a large radiator. Then again, fitting a 2x 140 radiator to the front panel isn’t very difficult for those who own a drill.

Here’s how the completed system appears in its stock configuration.

And here’s how the case looks after adding those parts. We’re testing it both ways.

The CASE-V08 is compared to our most closely priced glass-paneled rivals, with the Raidmax Alpha Prime being the closest match at three glass panels and four LED fans. The Alpha Prime does not, however, include a high-airflow upgrade kit.