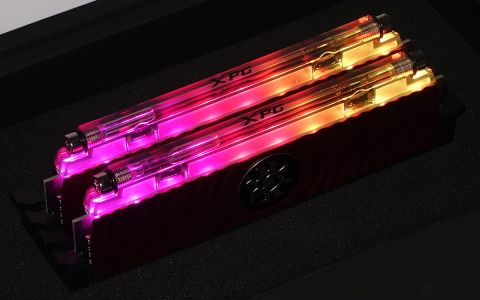 Adata sent two single-packs of its 16GB DIMMs which, when put together, carry a part number of AX4U3200316G16-DR80. We received these ahead of U.S. availability, waited a month for pre-sales listings, tested them, and then sat on the results for four additional months before they finally showed up on Adata’s web store at a discount price. It’s only fair that we put this out during Black Friday sales week then, as one of its biggest rivals is also involved in a Black Friday sale.

First came the heat spreaders, then came the lights. RGB was sure to follow as manufacturers and VARs attempted to one-up each other, and perhaps the most spectacular presentation of that latest visual trend was found in the water capsule atop Adata’s original XPG Spectrix D80. At least one of its competitors hopped onto the trend with a capsule-topped SSD, while both EK and Bitspower have added RGB to their motherboard/CPU monoblocks simply to complement Adata’s memory (perhaps it’s the other way around).

Two major differences between these modules and the kit we reviewed a year ago are that these are rated at DDR4-3200 (rather than 3600) and have two 8GB ranks per module for a total of 16GB per DIMM. That means buyers get 32GB spread across four ranks, which our tests have shown is a great way to boost performance on Intel’s LGA 1151 platforms.

Both the 8GB-per-DIMM and 16GB-per-DIMM capacities use the same chips: Adata simply populates both sides of its 16GB DIMM to produce its doubled capacity. Two-DIMM motherboards are the best reason for buyers to pay more to get their 32GB on two rather than four modules.

Timings for the 16GB-per-DIMM version of Adata’s DDR4-3200 aren’t exactly tight, but they do meet our basic performance standard with one cycle CAS for every 200 MHz data rate. Moreover, these modules contain a DDR4-2666 XMP at 1.20V for systems that can’t be clocked beyond that data rate, such as is common on H370 and non-K Core-i5 and Core i7 CPUs. Even that fallback setting requires XMP however, and boards that lack even that feature will be stuck at DDR4-2666 C19. Adata holds its advantage even for buyers who figure out too late that their boards don’t support XMP, as that last setting still beats the DDR4-2133 top non-XMP data rate offered by many of its competitors.

Fortunately for Adata, this year’s 2x 16GB reviews have revealed numerous DDR4-3200 kits to compare, and these even have the same 16-18-18 timings. Patriot’s Viper Steel and G.Skill’s Ripjaws V come in at a remarkably low price due in part to their lack of RGB.

XPG Spectrix D80 came up a little short of three competitors in overclocking, with the HyperX Predator RGB’s lead being the Spectrix D80’s most significant loss since both are RGB-equipped. On the other hand, we should probably consider that anything past DDR4-3600 is a good result from a kit that’s labeled DDR4-3200.

Though it didn’t overclock as well as some competitors, XPG Spectrix D80 withstood the quickest primary timings. We’re hoping to see a significant performance advantage in a few of our benchmarks.

Sandra’s memory bandwidth test is impacted by the latency between packets, which allowed the Spectrix D80 to reach the highest scores at every custom-tuned setting. Its baseline XMP setting fell slightly behind the pack, however.

The improved latency did not translate into performance victories in F1 2015, though anyone still wondering about the above-mentioned four-rank performance advantage can compare these four-rank kits to the data of our two-rank DDR4-4133 kit review to see how four DDR4-3200 ranks outrank two DDR4-4133 ranks.

Lower completion time means better performance in 7-Zip, and the XPG Spectrix D80’s anticipated win finally shows up there. Will that help justify its price difference?

Availability has been the biggest problem with Adata’s XPG Spectrix D80 2x16GB kit, but that was partially alleviated when the company went from relying on drop shippers for US distribution to listing it at its own store. And if you’re interested, now looks like a great time to buy.

Our chart uses current street pricing and to be fair, the Kingston kit’s price simply hasn’t dropped from previous highs to reflect current market conditions whereas the G.Skill non-RGB kit was already cheap before it added a Black Friday deal. For system tuners, the D80’s higher supported data rate and tighter supported timings are probably worth at least the $4 premium over G.Skill’s Ripjaws V. Meanwhile, paying only $4 more for RGB and getting “Liquid Cool” free must look like the bargain of the year for RGB lovers.