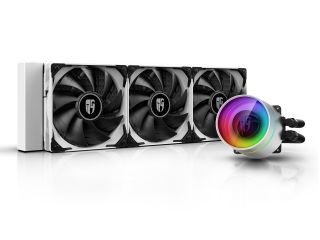 On the face of it, this liquid cooler doesn’t appear to contain anything all too special. It looks like a pretty straight-forward 360mm all-in-one unit, albeit with some nifty white styling and fancy lighting on the CPU block. However, Deepcool has integrated a leak-prevention technology that it calls “Anti-Leak Tech Inside.” Anyone else getting an “Intel Inside” marketing vibe here?

Deepcool's leak-prevention tech works by including a sort of rubber baggy that can expand and shrink inside a space at the end of the radiator. One side holds coolant, and the other side is exposed to the environment, allowing the internal pressure of the unit to stay somewhat close to the environmental pressure – essentially, the leak prevention works by offering a form of pressure relief.

We’ve discussed this feature internally here at Tom’s Hardware, and we’re not convinced it offers any added value. The rubber tubing on most AIO’s these days has enough expansion capacity to deal with any of these changes, and even something as simple as an air bubble that gets bled to a small reservoir is adequate to deal with any of the pressure changes in these sealed units. This doesn’t mean that it’s a bad feature per se, but rather that we don’t believe that these units are any more leak-resistant than most properly-built competitors -- so be careful before buying into the marketing materials too deeply.

The unit comes with three TF120-S fans that come with the same color frame as the radiator. They have a second layer at the end of the blades, and come with noise-damping anti-vibration pads at the corners of the frame. They’ll spin at speeds between 500 and 1800 RPM, and will make up to 32.1 dBA of noise while pushing up to 64.4CMF per fan. Fortunately you can control them through PWM to keep those noise levels down during light workloads.

The unit’s pump features a 3-phase motor that consumes up to 2.4W. It isn’t PWM controllable with just a 3-pin connector, but also makes only 7.8 dBA of noise at its standard speed of 2550 RPM, so it shouldn’t be too much of a bother anyway. The lighting on the pump is addressable RGB, and it has replaceable internal logos, so you can replace this with the included ying-yang template or create your own.

Deepcool assigns the cooler a $169.99 MSRP, and they’re currently available for purchase.

Topics
Cooling
Be In the Know