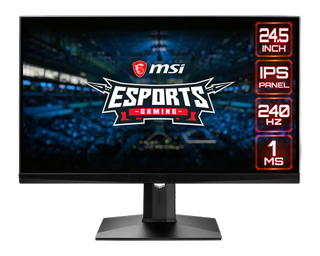 Three new displays from MSI hit retailers today, and they all boast specs rivaling some of the best gaming monitors and courting FPS players, including refresh rates of up to 240 Hz.

Both monitors also include MSI's Night Vision feature, which offers a “smart black tuner” that attempts to selectively brighten details in dark areas without brightening the whole screen, as well as anti-flicker and blue light reduction. The design for both monitors is fairly standard for MSI, with thin bezels on the front and a two-legged stand.

The only difference between the two monitors appears to be screen size, with the G241 measuring 23.8 inches and the G271 coming in slightly larger at 27 inches.

The MSI Optix MAG251RX, which MSI first announced in January, also hit markets today. Like the G241 and G271, the MAG251RX features a 1080p IPS screen with an advertised 1ms response time, along with the same bonus features, such as Night Vision. But the MAG251RX boasts a few additional features too.

There are two major selling points here. First, the refresh rate has been boosted from 144 Hz to 240 Hz. Second, instead of AMD’s FreeSync, the MAG251RX opts for Nvidia G-Sync.

On top of that, the MAG251RX supports HDR content; however, we don't expect it to be the best HDR monitor, as its VESA DisplayHDR 400 certification points to a minimum max brightness of 400 nits and we'd prefer an HDR gaming monitor to hit at least 600 nits.

Visually, the MAG251RX comes in at 24.5 inches and also focuses on a thin bezel design. The two-legged stand, however, has now been swapped out for a simple rectangle.