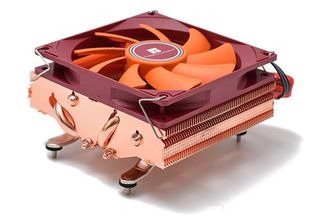 With the high price of copper, seeing full-copper CPU coolers isn’t a common sight anymore. According to TechPowerUp, Thermalright has decided it’s time again for one and introduced the AXP-90. It’s not very big , but it’s full-copper, except for  some screws and brackets.

The AXP-90 is a simple low-profile cooler that comes with a copper cold plate that leads to four copper heatpipes, which lead into a copper fin stack with 57 fins, and a neat orange fan with a burgundy/maroon fan casing. The unit weighs in at 490 grams in total and is no taller than 47mm, so unless you’re using it in a very cramped system, clearance shouldn’t be an issue.

The 15 mm thick fan can push up to 42.58 CFM of air when spinning at its maximum of 2700 RPM, but with PWM control can spin at much lower speeds.

If you’re interested, you’ll have to watch out for which version you purchase as it comes in a variant for the LGA115X sockets and another one for AM4. Pricing in China is set at 299 Chinese Yuan, or about $43 USD. We’re curious if this little unit will make it over to the states.