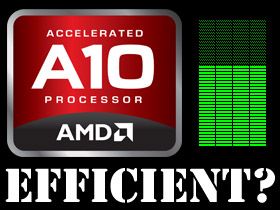 Trinity: Great Gamer, But What About Power?

By now, you’ve read all about AMD’s unconventional approach to introducing its Trinity APU architecture, peeling back the embargo on gaming-oriented performance first, and then granting permission to talk about pricing, overclocking, and alacrity in x86-based apps via benchmarks a few days later.

I warned the company that splitting Trinity’s debut into two days made it look like AMD wasn’t particularly proud of its showing in productivity and content creation apps—and it had no reason to do this, in my mind. As far back as June, we had already shown that a Piledriver module was performing about 15% better than Bulldozer in single- and multi-threaded apps at the same clock rate. We knew that Trinity would be faster than Llano in some situations, but slower in others.

AMD went ahead with its plan. But because we got our hands on Trinity-based A10, A8, and A6 processors right after they were announced at Computex, the performance data that AMD wanted to keep under wraps until now was already available in AMD Trinity On The Desktop: A10, A8, And A6 Get Benchmarked! and AMD Desktop Trinity Update: Now With Core i3 And A8-3870K. If you want to know how Piledriver does at the same clock as Bulldozer, how memory bandwidth scaling affects graphics performance, how effective Dual Graphics is, and how power changes from one generation to the next, all of that information is available between those two links, and was up in our top carousel last week.

But back in June, I was missing performance data from Intel’s Ivy Bridge-based Core i3s. They weren’t available yet. So, as I was trying to come up with an interesting angle for today’s story, I knew we needed results from the Core i3-3220 and -3225, at least.

Also, it was apparent that a lot of work went into improving Trinity’s idle power consumption compared to Llano. But the APU’s 100 W TDP is still significantly higher than Core i3’s 55 W ceiling. Almost certainly, Trinity can’t be made to outperform and under-consume Ivy Bridge. We're nevertheless testing our A10-5800K at lower voltages and higher clock rates to see if it can be made to shine more brightly against the backdrop of Intel’s entry-level chip, which is far less flexible.

As a result, we get to add overclocked and undervolted performance to our existing library of Trinity-based data, along with a comparison to Intel’s Core i3 competition. And with pricing information in our hands, it becomes pretty easy to set AMD and Intel up head-to-head and declare one company’s solution better than the other’s. Are you ready for the big judgement?

Current page: Trinity: Great Gamer, But What About Power?

Next Page A10-5800K: The Undervolt And Overclock
Topics
AMD
Components
CPUs
Power Consumption
Processors
138 Comments Comment from the forums
Be In the Know