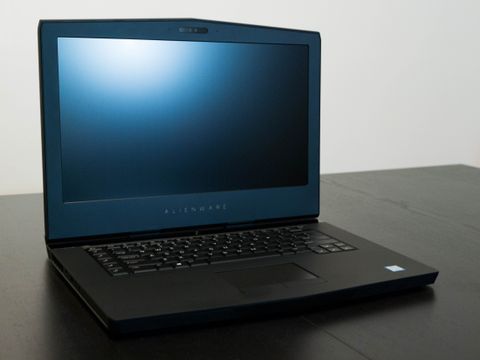 The Alienware 15 we tested was more budget-oriented that most offerings. It comes with everything that Alienware is known for, such as superb build quality, impressive cooling, and comprehensive backlighting software. To offer a notebook this robust at such a low price requires compromises, and so this configuration contains an i5-6300HQ, a 6GB GTX 1060, and 8GB of memory. While this particular model may play your favorite games, probably not at the highest settings because of its i5 CPU.

Alienware is a well-known brand in the gaming laptop market, and with each new CPU or GPU update the company outfits its laptops accordingly. Today, we’re looking at the Alienware 15 R3, which features the new Nvidia GeForce GTX 1060 Pascal GPU.

Alienware’s design philosophy is one of the most iconic for gaming laptops. It is aggressive, yet sleek and sophisticated. Its sharp, erratic edges and vibrant lighting might best be described as extraterrestrial. Indeed, Alienware’s products look like spaceships miniaturized to fit on your desk.

Starting the tour on the Alienware 15 R3’s hood, you’ll find a matte gunmetal surface, which is divided into three portions, as is standard for the Alienware aesthetic. Near the top is the silver-faced Alienware logo, which lights up when the system is powered. You can change the lighting colors and effects may via the Alienware Command Center software.

The bottom has the same texture and finish as the hood, but it has a distinct plastic feel. This isn’t to say that it feels any less premium. There is a large exhaust vent extending the length of the removable bottom panel, beyond which you can see the Alienware 15’s cooling system. The Alienware’s overall build is incredibly solid and offers virtually no flex.

The workspace features a matte, rubberized finish that is pleasing to the touch. This is a huge positive, especially since you’re likely to make the most contact with this area. Continued use will leave fingerprint smudges, but not nearly as quick as a glossy surface would.

There are four exhaust vents; two on the back and one on each side. The side vents are mostly hidden by the Alienware’s vent grilles, whereas the back vents are much more exposed, revealing more of the aluminum heat fins.

The hinge offers an impressive 180° of movement, which is more than enough for a gaming laptop.

The Alienware 15’s speakers are front-facing and have decent sound quality, even at highest volumes.

The right I/O port is just a lone USB 3.0 port, while on the left you'll find the headphone jack, a microphone jack, a USB 3.0 port, USB 3.1 Type-C port, and a Noble lock. On the back, you’ll find a Gigabit Ethernet port, a mini-DisplayPort, an HDMI 2.0 port, a Thunderbolt over USB Type-C, and the proprietary Alienware Graphics Amplifier port.

The Alienware 15 features a standard 15.6" IPS display, which offers excellent viewing angles. The display runs at 60Hz, but it doesn't have a G-Sync panel. The mini DisplayPort and HDMI port allow the Alienware to output to two additional displays. The Graphics Amplifier port can provide Alienware 15 with additional graphical horsepower which, depending on the GPU installed in the amplifier, may be enough for the Alienware 15 to play games at UHD.

The Alienware 15 uses a standard scissor switch keyboard with six macro keys on the left. The spacing between the keys is rather tight, leading to a cramped typing experience. This is unfortunate considering that it is the most frequently used input device. It makes sense to carry a mouse with a gaming laptop, but most people wouldn’t want to carry a separate keyboard as well.

The bottom plate is secured to the Alienware 15 with seven screws. Beneath the bottom plate, you’ll find the hefty cooling system, two slots for M.2 (which are empty in our configuration), one mSATA slot, two memory slots in the middle (one of which is empty), and the HDD on the top left.

The Alienware Command Center is the central hub software. From here, you can edit lighting effects through the AlienFX tab. Areas of lighting include the hood logo, the Alienware logo beneath the display, three areas on the keyboard, the light bar accenting on the sides, and the trackpad. AlienFusion provides easy access to power, display, and sleep settings. The Alien TactX tab lets you create macro profiles. Finally, the AlienAdrenaline tab lets you create game modes, monitor performance, and edit the Graphics Amplifier settings.