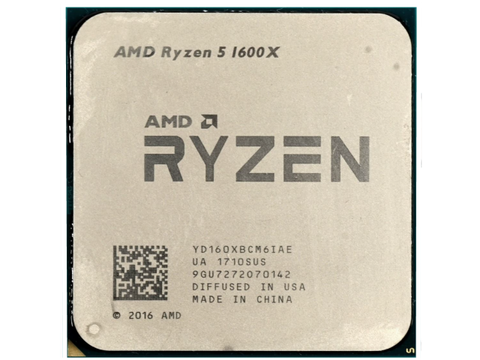 As mentioned, our U.S. and German teams worked on different parts of our launch coverage. Both teams unified on their utilization of the Windows 10 Creators Update, though, updating to the latest motherboard firmware versions and chipset drivers as well. As with the gaming results, these are completely new for today's story.

The Ryzen 5 1600X lands exactly where we'd expect in a lightly-threaded workload dependent on clock rate: between the 1800X and Ryzen 7 1700X.

Clock rate reigns supreme yet again, though the Ryzen 5 1600X does trail Ryzen 7 1700X this time around. Still, when you consider a higher frequency helps the 1600X beat AMD's eight-core Ryzen 7 1700, we might already be looking at a better value play just days after commending the 1700's position against AMD's higher-end Ryzen 7s.

Consistently, we see AMD's Ryzen 5 1600X land between the Ryzen 7 1800X and 1700X. It should be clear by now how important clock rate is to per-core performance, particularly when the workload doesn't utilize all of a processor's available execution resources (as in these benchmarks).

In the professional apps able to fully utilize an eight-core Ryzen 7 CPU, the Ryzen 5 1600X cannot keep up. It does, however, trounce quad-core Core i5s in those workloads. Where the threading isn't as thick, a clock rate advantage helps propel the 1600X above Ryzen 7 1700.

Blender really likes the 1600X's combination of 6C/12T and 1800X-equivalent clock rates, often placing the Ryzen 5 over AMD's Ryzen 7 1700. Once again, in the tests that do utilize Ryzen's resources, it obliterates the Core i5s, going so far as to challenge Core i7-6800K in certain workloads.

HandBrake readily utilizes all of the cores these CPUs present, so it's no surprise that the Ryzen 7 line-up appears ahead of Ryzen 5 1600X. More interesting, perhaps, is the fact that Ryzen 5 1600X appears alongside the $420 Core i7-6800K.

Our 7-Zip compression workload is threaded, yet the higher-clocked Ryzen 5 1600X slides in ahead of Ryzen 7 1700. The quad-core Core i5s are quite simply out-classed. The decompression test cares only for clock rate and IPC throughput, though. Intel's Kaby Lake architecture rises to the top, followed by Broadwell-E. Ryzen 5 1600X must do battle against the Ryzen 7 models using its generally higher frequency.

Overall, Ryzen 5 1600X is an interesting workstation chip. It leverages six SMT-enabled cores and a reasonably high clock rate. Pair the 1600X up with an inexpensive B350-based motherboard, and Intel's Broadwell-E-based Core i7s can't touch the resulting value. AMD's weakness is memory support. We couldn't use more than 32GB in our test system, and if you go over two modules, you're sacrificing bandwidth on the already-anemic dual-channel controller.