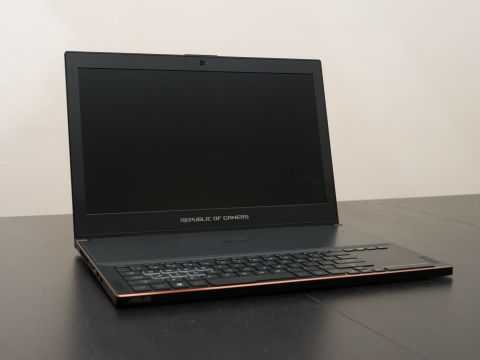 Note that the Max-Q GPU design allows it to perform well within a more stringent thermal envelope, and Nvidia has noted that overall performance may degrade slightly on a like-for-like configuration basis. Nvidia tells us that the GPU clock rate for a Max-Q GTX 1080 is 1101-1290 MHz (base), and 1278-1468 MHz (boost). The clock rate depends on the laptop's thermal and electrical system design. For comparison purposes, a non-Max-Q GTX 1080 GPU has a base clock of 1556 MHz and a boost clock of 1733 MHz. Nvidia states that a Max-Q laptop is likely to get anywhere from 72 - 83% of the performance of a similar non-Max-Q laptop. We'll see how that plays out.

As we noted on the previous page, we do not have a system with identical specifications, namely a GTX 1080 GPU with an Intel Core i7-7700HQ CPU, not to mention the 24GB of DDR-2400 memory the Zephyrus dons. While some of the following results are attributable to some of the differences between the various configuration, we will have a better idea of Max-Q performance impact after more testing—of more Max-Q products in various configurations, including the GTX 1070 GPU, but also with more non-Max-Q designs with equivalent specifications.

Specifically, we do not have the Eurocom Tornado F5 in our labs. It should arrive back shortly, and we can conduct more testing to compare what happens during GPU-bound games, and what performance degradation takes place due to various factors at play, but the consistent differences we see between the Eurocom Tornado F5 (non-Max-Q GTX 1080) and the Asus Zephyrus (Max-Q GTX 1080) are largely attributable to the clock rate differences mentioned above. We've made a few notes on a couple games regarding the average clock rates we're seeing during the benchmark run, just to take a pulse of Max-Q. In general, we see the Zephyrus hovering toward the top end of the frequency range.

Ashes of the Singularity presents the Zephyrus with its first major gaming challenge, as it is wont to do. This game brings even the most powerful systems to their knees. Because this title makes heavier demands on the CPU, the odds are a bit stacked against the Zephyrus with this comparison grouping. In fact, the Zephyrus doesn’t score much better than the Alienware offering, with only an 8% gap. Meanwhile, the i7-7700K lifts the Eurocom up 13% higher than the Asus. Both fall shy of 60 FPS, the Eurcocom laptop just barely so.

We test Ashes in DirectX 11 mode because of some mGPU-related issues under DirectX 12. The game doesn't support SLI, which is another reason why the Eurocom product bests MSI's Titan SLI.

At UHD, the Zephyrus is barely capable of maintaining 30 FPS, so you’ll have to dial back the settings for a smoother frame rate to play at this resolution.

DiRT Rally puts demands on more than just the GPU, which works against the Zephyrus in this comparison set also. As such, the Eurocom laptop takes the lead once more, outscoring the Zephyrus by 19%. The Asus laptop only scores 5% better than the Alienware system, which contains the same CPU and a GTX 1070. Nvidia tells us that a Max-Q 1080 GPU will perform somewhere between a standard GTX 1070 and 1080, and with the CPU also in play here, this result seems to fall in line with expectations.

The gap between the Asus and the Eurocom falls to 8% at UHD, where GPU power is paramount. You’ll also find better performance out of multi GPU setups like the MSI laptop, which delivers anywhere between 12% and 19% additional performance over the single GTX 1080 systems (vs 7% at FHD compared to the Eurocom laptop). (Note: We did not test the Alienware 15 at UHD.)

A GTX 1080 can handle Grand Theft Auto V for the most part, although the Vinewood Sign scene has proven to be extremely taxing due details like rendering distant objects. So while the Zephyrus delivers close to 60 FPS in most cases, you’ll find your frame rate suffering at times—but this is hardly different than any of the other well-equipped gaming laptops we've tested.

Have you ever seen a flipbook animation? They’re nifty to look at, but we’d prefer not experiencing this while gaming. Unfortunately, that’s exactly how it feels to play GTA V at UHD on the Zephyrus; the frame rate hovers around 20 FPS, and even drops down to 15 FPS during the infamous Vinewood Sign scene.

We have yet another platform-based title in GRID Autosport, so the Zephyrus is a bit bottlenecked by its mobile Core i7 CPU. At FHD, it only scores 5% better than the Alienware laptop, whereas the more aptly equipped Eurocom breezes by with a 23% performance lead (and a slight lead over the MSI Titan SLI).

UHD appears to be an equalizer in titles that require balanced platforms. The Eurocom’s once significant lead drops to 13%, while the MSI Titan SLI jumps ahead thanks to its second GTX 1070.

Like DiRT Rally and GRID Autosport, performance in Hitman requires a bit more balance from the overall platform. Also, Hitman doesn’t play well with multi-GPU configurations in DirectX 11 mode. Therefore, the Eurocom laptop takes first place thanks to its desktop-class processor, while the MSI Titan SLI is relegated to a single GTX 1070. Even still, the Titan SLI outperforms the Zephyrus by a whisker, likely due to its more robust i7-7820HK.

UHD performance paints a similar picture, with the gap between the MSI and the Asus widening to about four frames, or about 8%. Meanwhile, the Eurocom just barely maintains 60 FPS. Titles like Hitman are best left to systems with adequate CPUs when it comes to UHD; or compromise on some of the higher settings. We tested clock rates and temperatures once more at UHD. This time, the average clock rate is lower at 1320 MHz, and rarely exceeds the estimated maximum boost clock of 1468 MHz. The average temperature is also much higher, at 76° C.

Most of the games tested so far were platform-based, so it’s time to let the GPUs shine. Metro: Last Light Redux’s GPU-focused benchmark can be handled by a single GTX 1070. The Alienware proves that, but the Zephyrus, with its GTX 1080, offers 10% more performance at FHD. A higher clock rate GPU (or an additional GPU) provides even more still.

Unfortunately, the GTX 1080 doesn’t quite cut it at UHD. Both the Tornado F5 and Zephyrus laptops suffer, falling well below playable frame rates. The Titan SLI’s additional GTX 1070 has it hanging on by a thread. This time, the average clock rate rises a bit higher, to 1409 MHz, although it doesn't quite match Nvidia's 1468 MHz maximum. The average temperature is also slightly lower, at 74° C, and it never reaches 80° C.

Rise of the Tomb Raider pushes the graphics workload harder, and the Asus Max-Q laptop falls short of the coveted 60 FPS, whereas the Eurocom manages to surpass the threshold. Here we see the difference the regular GTX 1080 makes compared with Max-Q. Either way, some minor tweaks to the Asus laptop gets you plenty of performance in this game.

Once again, at UHD, the GTX 1080-equipped laptops fall well below playable frame rates, and you’ll need at least two GTX 1070s to get close to a serviceable experience.

The Division is yet another GPU-reliant title, although it isn’t nearly as demanding as RotTR. Any GTX 1070-based system and above can enjoy solid frame rates here at the highest settings, and you can expect the Asus Zephyrus to perform around 7% better than a similarly configured laptop with a GTX 1070 (ie, the Alienware 15).

Luckily, The Division isn’t as demanding as other games at UHD, and here, the Zephyrus secures a playable frame rate. Unfortunately, additional CPU and GPU power don’t provide enough assistance, so although the Tornado F5 and Titan SLI offer roughly 16% and 26% more performance, respectively, this doesn’t amount to much frame rate-wise.

Our gaming benchmarks conclude with Thief, yet another title demanding balanced platform performance. In fact, the GTX 1080 only grants the Zephyrus 2% additional performance over the Alienware system. Meanwhile, the Eurocom and MSI laptops trade blows. At these framerates, if you’re looking for good performance, you don’t have to look further than a GTX 1070, but asking for more will come with a higher price tag.

Meanwhile, the Zephyrus framerate falls below 60 FPS at UHD, but it’s still close enough that reduced settings will get you past that magic barrier. If you want to game at 60+ FPS without such compromises, you’ll need a Titan-like configuration.

Prev Page Synthetic Benchmarks Next Page Battery, Thermal & Display Testing
10 Comments Comment from the forums
Be In the Know