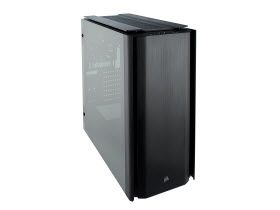 The Corsair Obsidian 500D has cables for HD Audio, front panel I/O, and USB 3.0, as well as a USB 3.1 Type C header. An accessory box is secured in the uppermost 3.5" hard drive caddy behind the motherboard tray. Inside the box were various screws and zip ties. A ziplock bag containing the user manual was located in the PSU compartment.

The inside of this chassis is very spacious. Thanks to the lack hard drive racks in the main compartment, and the inclusion of the seven (plus two vertical) expansion slots, it is possible to install up to three graphics cards in SLI and/or CrossFire. [That is, as long as your third card mounts in the sixth slot, which many motherboards don't support, or your cards are single-slot, which most aren't, or you purchase a flexible riser cable to deploy the side slots and the additional card isn't blocked by the PCI Express power cables of the other two cards, or... -Ed.] Although the 500D includes two expansion slots for vertically mounting a dual-slot GPU, no riser cable is included. You'll have to bring your own.

The Obsidian 500D also features dedicated mounting locations for reservoirs and water pumps in the bottom of the chassis, located between the PSU tunnel and the front fan-mounting locations.

When it comes to cooling, we were a bit disappointed to discover that the 500D, billed by Corsair as a premium mid-tower chassis, ships with only a single 120mm intake fan. Because of the size and placement of the included fans, airflow in this chassis is limited. Obviously, this can be remedied by the end user, but at this price point, we expected two 120mm or 140mm intake fans, at the least. In total, this chassis can be equipped with up to six 120mm or four 140mm fans.

Corsair has incorporated removable fan/radiator brackets in the front and top of the chassis. They make installing a radiator or an all-in-one-style CPU cooler in the 500D a breeze.  Removing the fan bracket is simply a matter of removing two thumbscrews and sliding the unit out and away from the chassis. Once you have attached your cooling components to the bracket, you'll slide the entire setup back into your system and reinstall the thumbscrews. It's as easy as that.

Although you'll find a good deal of space in the top of the chassis, some coolers may be limited to a single-fan configuration, depending on the size of your cooler, fan thickness, and motherboard components. The exhaust-fan mounting location can be fitted with 120mm radiators and all-in-one coolers in single- and dual-fan configurations.

Radiators and all-in-one coolers can be mounted in the top, front, and rear of this chassis. The mounting locations in the front of the chassis support radiators and liquid coolers up to 360mm, with enough room for fans mounted on both sides in a push-pull configuration. At the risk of sounding like a broken record, we want to point out that, even though most all-in-one coolers can be physically mounted in the front of this chassis, because of the fixed length of the tubing, some coolers might not be able to reach the CPU socket. But these locations are ideal for mounting radiators for water-cooled graphics cards.