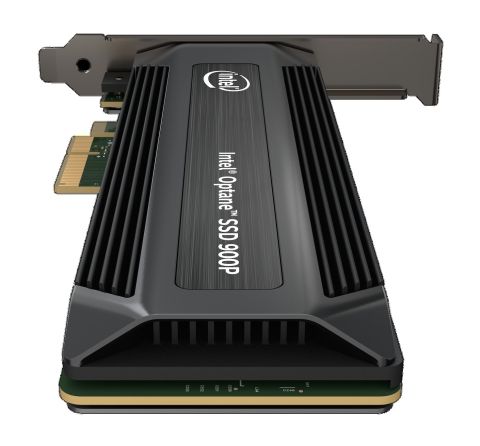 Spend it if you’ve got it. The Intel Optane SSD 900P 480GB is the highest capacity available, but don't expect more performance than the 280GB drive. You get 200GB more storage, but unfortunately, you spend nearly enough to buy an additional 280GB model. The dollars don't always make sense, but the 480GB drive gets you a larger 3D XPoint storage device.

Update 12/4/2017: We have added the 480GB capacity to the original review, which only included the 240GB drive. The review of the 480GB Optane drive begins on page three. Our conclusions have also been updated on page four.

The time is finally here. You’ve seen 3D Xpoint for the enterprise in our Intel DC P4800X review, and you’ve seen it as a fast cache for the desktop in our Optane Memory Review. But this is the form you’ve really been waiting for: A bootable 3D Xpoint SSD for the desktop. The Intel Optane 900p. Purportedly the fastest consumer SSD known to mankind. It has arrived, and it’s time for us to review what promises to be a massive generational shift in consumer storage.

The Intel Optane SSD 900P is lightning fast thanks to its new 3D XPoint memory, but it's also expensive because the cutting-edge technology is in high demand. Intel and Micron developed 3D XPoint memory for more than a decade in a secret project that created the first new productized memory since 1966. The companies still won't tell us all of the details behind the technology, but outside firms have confirmed it is a form of Phase Change Memory (PCM).

This speedy new memory is designed to fill the performance gap between DRAM and storage, so it crosses into both territorties. 3D XPoint is more expensive than NAND, but it is also faster and provides more endurance. 3D XPoint is slower than DRAM, but it is also cheaper and denser. The best part? Unlike DRAM, it retains data when you remove power, making it a suitable replacement for NAND.

Going into this review, we already knew the Optane SSD 900P would come away as the fastest consumer SSD ever. Intel derived the desktop version from the enterprise-focused DC P4800X, the fastest SSD we've tested. The real question was how much Intel would neuter the consumer version to reduce cost and keep data center administrators from adopting the desktop model as their own.

Intel did find a way to keep enterprise customers from scooping up all of these drives: the desktop Optane SSD 900P comes with one-third the endurance of the data center model and loses some enterprise features, such as SMBus. Nevertheless, the desktop Optane SSD 900P matches or exceeds the DC P4800X's performance specifications, so it promises explosive performance.

Intel's bringing the Optane SSD to market in 280GB and 480GB capacities. The drives come in two predictable form factors: a PCIe Add-In Card and a 2.5" U.2 drive with an SFF-8639 connector. Intel will only have four models ready during the initial rollout, the 480GB U.2 will come later in the year. There are two model numbers for the U.2 drives, but we only have the specific numbers for the 280GB drives. One will ship with a standard U.2 cable and the other ships with an M.2 to U.2 adapter.

The 900P's capacities bookend the 375GB data center DC P4800X. Intel shared a roadmap with us that listed higher capacity enterprise models coming later this year, and even larger drives in 2018. We fully expect the desktop versions to grow in time as well, but Intel hasn't mentioned any definitive plans for future drives.

The Optane 900P provides up to 2,500 MB/s of sequential read throughput, which is 100 MB/s higher than the enterprise DC P4800X. The sequential write needle pegs at 2,000 MB/s, but you'll need to work to get there. The Optane SSD 900P really separates itself from the NAND SSD pack when we compare random performance. The desktop drives reach up to 550,000/500,000 read/write IOPS, which is well beyond any desktop SSD.

By now you're accustomed to high random performance specifications with NVMe SSDs, but the Optane products are different. As we demonstrated in our Optane Memory review, the new memory is capable of reaching very high performance at low queue depths. We can even fully saturate the drive with some workloads before reaching a queue depth of 8.

3D XPoint is bit-addressable, so in contrast to NAND-based SSDs that write in larger chunks, the Optane 900P can break 4K data into smaller pieces and scatter it across multiple die, which boosts performance. Each 3D XPoint die also has 64 separate regions that can respond to commands simultaneously, whereas normal NAND has a maximum of four. That should provide an explosive performance gain for desktop PCs.

Unlike NAND, 3D XPoint is a write-in-place memory. That means the SSD controller doesn't have to erase existing data before writing new data. Eliminating the extra write cycle increases endurance and performance while eliminating the normal garbage collection process. That makes the 900P immune to the petty concerns of normal SSDs, like steady-state performance.

The Optane SSD 900P will accelerate any storage-bound workload. Unlike Optane Memory, this is not a cache device, though you could get very creative with storage tiering using 3rd party software. That's a path we would like to explore in the future.

Intel released a list of workloads where the Optane 900P excels compared to NAND-based SSDs:

That covers most types of data access. We don't know anyone who specifically targets a high-performance low-capacity drive, though. Most users shop by price, but the Optane SSD is the only beyond-flash product available so normal shopper behavior probably doesn't apply.

The Intel Optane 900P is a new tier that goes beyond fast, so existing SSDs have just moved down a notch. For instance, the Intel SSD 750 and Samsung 960 Pro are no longer the fastest; now they are "less than Optane."

We do have some concerns, though. The enterprise DC P4800X 375GB currently retails for $1,900 at Newegg. We've never seen one at the $1,520 MSRP. Limited availability is also troubling. Intel has shipped the DC P4800X to data center customers for several months, but finding a drive through the channel is fairly rare. After Flash Memory Summit, we tried to find a P4800X at MSRP but came away empty-handed. Many of the retailers we contacted quoted us a two-to-three month wait time. That obviously causes some concern with Optane SSD 900P availability. One of the retailers with a 900P listing shows availability on October 30th. In our briefing, Intel stated the drives would be available on launch day (10/26/2017).

The 900P comes with a limited five-year warranty that's restricted by the endurance rating. The endurance rating supports 10 drive writes per day for both capacities. That works out to a massive 8,760 terabytes of warrantied writes for the 480GB model. In comparison, the Samsung 960 Pro 2TB offers 1,200 terabytes of warrantied writes, so the 900P easily offers enough endurance for desktop users. It's a good thing the 900P's endurance is high--the drive is so fast we managed to write 85TB in a little over a day. Intel stated the drives will move into a read-only state once the endurance expires.

The Optane SSD 900P is the company's first consumer 9-series product. Intel chose an appropriate drive for the top-shelf designation.

To coincide with the launch, Intel will show off the drive for the first time at CitizenCon, a community gathering of Roberts Space Industries' Star Citizen players. As part of the partnership, the Optane SSD 900P will ship with a download code for an exclusive in-game Sabre Raven ship that has unique in-game capabilities. As you might have guessed, the Sabre Raven's specialty has to do with it's over the top speed.

The drive ships with an additional bracket for true half-height, half-length use in smaller chassis.

Intel hasn't explained why some online retailers posted product pages for additional models. The official explanation is that there are different part numbers for Star Citizen bundles and the standard models will come later. Earlier in the year, a leaked slide emerged with the correct 900P specifications. That sole screenshot had an image of a 900P with a lighting effect from either LEDs or RGB LEDs. Intel didn’t announce that product today, and the company doesn't discuss unreleased products.

On the reseller side, we found a few references to PCI Express 4.0 and the corresponding part numbers. The listings came just days after PCI-SIG announced the final specifications for PCIe 4.0. We think this may have been an error on the resellers part, possibly related to the 900P's PCIe 3.0 x4 interface. We should see PCIe 4.0 platforms and components in 2018, but it wouldn't make sense for Intel to release a PCIe 4.0 product now.

There isn't much to see on the drive thanks to two metal covers that act as heatsinks and protect the sensitive surface mount components. The drive does look great, but we have to wonder what happened to the LED version that was pictured in a leak from Asia earlier in the year.

We found Intel's custom seven-channel ASIC NVMe controller underneath the heatsink. It can address up to four die per channel (28 total). The 900P 280GB comes with 21 16GB packages spread over both sides of the PCB. That gives us a raw capacity of 336 GB of 3D XPoint memory.

Optane SSDs have spare area, but they don't use it in the traditional sense because many of the normal SSD rules don't apply. Instead, they use the extra space for ECC and metadata at the device level, and unlike NAND, they don't include any built-in over-provisioning at the die level. We can also assume that some of the extra capacity is used to replace failed cells.

We don't recommend removing the heatsink. Doing so damages the thermal pads because they don't separate cleanly. The custom ASIC controller and 3D XPoint packages don't provide us with a lot of additional information, just like Intel. The secrecy is still strong with this product, so we have limited technical information to share.