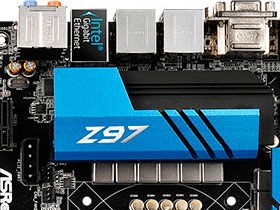 Tom’s Hardware readers are a savvy bunch. Simply visiting this site means that you’re either a knowledgeable technologist or eager to learn more. We keep it real for you. When a motherboard manufacturer uses the term mainstream, we know they're talking about budget-oriented. A couple of weeks ago, we sent out the invitations for our first round-up of boards based on Intel's brand new "mainstream" chipset, Z97 Express. In the invite, we had to tell vendors we were looking for enthusiast-class products, even though, to most of us, that range between $120 to $160 really is mainstream.

In the quest to differentiate, motherboard companies are getting more aggressive about segmentation. Simply requesting a batch of enthusiast-oriented submissions between those price posts isn't specific enough. Did we want overclocking-focused boards? Gaming-oriented? Is there really such a thing as a motherboard optimized for gaming? We're certainly excited that the explosion of high-profile games is pushing the boundaries of product design, at the very least.

Here's exactly what we're looking for, though: boards that support a couple of PCI Express graphics cards, high-end audio output, a high level of configurability, and enough stability to push a top overclock. However that combination of capabilities is classified, sure, gaming is in there. We just don't like limiting our performance pursuits to a single type of task.

And how about that new, mainstream chipset? It’s a good one. We know this because it’s been on the market for a year, more or less. I've confirmed with several motherboard manufacturers that Z97 Express is—at least functionally—a new stepping of the Z87. See that ME 9.1 firmware box in the above diagram? That’s Intel’s big achievement.

But before you dodge off to buy a motherboard we’ve already reviewed, you’ll want to look at the new crop anyway. These boards have new features that you’ll probably want, and are more likely to support your next-generation CPU upgrade out-of-the box. That’s because the new beta firmware that companies are releasing to support next-generation processors on Z87 products…preceded the launch of Z97. Of course, we won’t be able to make any promises until someone passes along a sample of Intel’s next-generation Core architecture.

SATA Express (SATA-E) is one of the anticipated features accompanying many of today’s new gaming-mainstream motherboards, but turns out to be a bit of a letdown. Pairing two standard SATA ports with a dual-lane PCIe link, it’s the cable-interface version of Intel’s M.2. Problems abound though, including the fact that it can’t be enabled simultaneously with M.2, that both M.2 and SATA-E eat PCIe lanes on a chipset that only offers eight, that both technologies also gobble up to SATA ports on a chipset that has six, and that the total bandwidth between the chipset and CPU is a scant 2 GB/s.

None less than our own Christopher Ryan opines that the popularity of M.2 in notebook PCs can be better-addressed in a desktop by using standard cables with RAID, that PCIe-based SSDs are already accomplishing what SATA-E hopes to add, and that the even greater flexibility of external devices really doesn’t mean much when the chipset’s DMI link is so restrictive. Add to that the likelihood that next-year’s SATA-E devices will more-than-likely have compatibility issues with third-party controllers, and the entire move appears little more than a marketing gimmick (for now).

With the “new technology” conversation now on the back burner, let’s turn our attention to these new motherboard designs and see what they bring to the table.