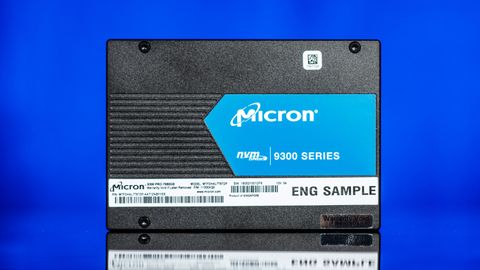 In today’s review, we’ve included a few various types of enterprise-class SSDs from SATA to AIC NVMe devices with memory faster than traditional flash. While these comparisons drives are not direct competitors, they do help to show where the 9300 PRO stands. The list includes a very powerful, but now aging 3.2TB Toshiba PX04 with 2D NAND, and Intel’s slightly older 1.2TB DC P3520, which features last-gen 32L 3D TLC.

We also threw in two very fast drives into the mix, the 960GB Samsung 983 ZET, which is the lowest-latency NAND product we've tested, and the 960GB Intel Optane SSD 905P. While the 905P is technically a consumer product, its 3D XPoint memory allows for much faster performance than flash across almost any workload. We also included an 800GB Toshiba HK4E, a powerful and efficient SATA SSD, to highlight the big performance gap between NVMe and SATA drives.

Samsung’s 983 and Intel’s Optane 905P are more optimized for shallow queue depths (QD) than their competitors, and it really shows. At QD1, they both read at over 1750MB/s. Micron’s 9300 on the other hand, while it can deliver a ton of performance when there are many data requests at once, a single request proves somewhat difficult. Delivering just 650MB/s at QD 1, the drive starts slow and lands between the PX04 and DC P3520. When workload intensity increases past QD4, however, it scores first place in the sequential read test at 3.5 GB/s.

The Micron 9300 PRO delivers the fastest write performance of any single-controller SSD we've tested, maintaining an impressively low write latency of just 0.68ms QD1. This nearly matches the Samsung 983 ZET, which outperforms it by only 0.02ms (0.66ms), but once the drives are tasked with multiple requests at once, the Micron takes off to deliver 3.5 GB/s of write throughput, just as it did in reading.

Trading blows with the Intel Optane 905P, the Micron 9300 PRO’s mixed sequential performance is pretty good, even without heavy over provisioning like the 9300 MAX. It also exceeds Samsung’s write performance at QD 4 and beyond.

Average power consumption ranged from ~6.5W up to a little over 17W during sequential workloads. Slower sequential performance at lower QDs results in rather low efficiency scores. At QD4, the 9300 takes second place overall but falls behind even the SATA Toshiba HK4E in the 100% read workload. Once it gets loaded up with work, however, the efficiency score climbs to second place during a read workload and first place overall in mixed write-heavy workloads at higher queue depths.