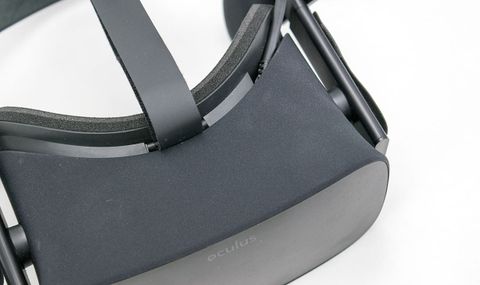 Although it’s tempting to start with the most dramatic benchmark numbers, or even the highest-profile launch title, we’re instead leading off with Lucky’s Tale. It’s a cartoony platformer that no hardcore gamer would expect to fall for, but we dare you to resist. The game turns out to be a blast, mostly because of the perspectives you get in VR.

Lucky’s Tale is also accessible across a wide range of hardware. We tested using the game’s Medium preset, and simply ran the same path from the start of the first level up to the first door you encounter.

The average, minimum and maximum frame rate results show all seven graphics cards delivering a consistent 90 FPS; that observation is mirrored as we compare frame rate over time. A look at the frame times shows several cards overlapping each other just under 12ms, with some noise between 11ms and 12.5ms. Understanding the source of that noise and its significance (if any) is a priority for us. For the time being, though, we assure you that Lucky’s Tale is remarkably smooth across every one of these cards—even the GeForce GTX 960 that falls below Oculus’ recommended spec. This is as good as it gets.

EVE: Valkyrie is the first game we saw running on the Rift back in 2014, and it’s arguably the most surreal experience in VR thus far. Playing it with any modicum of success requires lots of head movement as you lock on to enemies flying around. But benchmarking the title encourages the opposite. We ran the basic training sequence using the same flight path and minimal input to generate results. All of the available detail settings are set to their highest levels for this one.

The frame rate over time chart shows AMD’s Radeon R9 380 and Nvidia’s GeForce GTX 960 struggling, right up until the fighter launches from its hanger. From there, it’s smooth sailing across all seven boards.

Here’s the thing, though: even on those two slower boards, there is no perceptible performance problem in EVE. I enjoyed every second in the game, regardless of GPU. The implication is that the measurement Fraps takes does not fully account for what you see on an HMD (particularly in light of the news that asynchronous timewarp is active on the retail Rift).

It’s probable that EVE gets more demanding once you start whipping your head around in a multi-player space fight, so let us hit the other extreme. Chronos’ opening sequence is uncharacteristically taxing compared to what we’ve played through so far, and our numbers bear that out. Of course, we exacerbate the load by specifying Epic-quality details, whereas most gamers would rather dial down quality in favor of a smoother experience. But it’s to prove a point, we promise.

Only Nvidia’s fastest cards maintain a 90 FPS average. The frame rate over time chart shows how the GeForce GTX 960 gets pegged at 45 FPS, the next multiple of 90, while AMD’s Radeon R9 380 cannot quite maintain that level. As you might imagine, then, the frame times are a mess. Both of the slowest cards spend most of their time at the 22.2ms corresponding to their ~45 FPS averages.

Based on that train wreck, you’d expect Chronos to be puke city. But everything down to a GeForce GTX 970 and Radeon R9 Fury X is, again, smooth through the Rift. Those bottom three cards are the ones that exhibit noticeable choppiness where it’d seem ATW cannot adequately compensate for the lack of new frames to shift. You’ll only be able to take a couple minutes of that before calling it quits.

The fastest-paced title we tested is Radial-G, a racing game that has you picking the best line around a cylindrical track. This one doesn’t allow much time to be distracted by compromises in detail, so adaptive quality mechanisms could be particularly effective. Whether or not they’re implemented, we’re not sure.

Our benchmark run is a single three-lap race around the game’s most basic track. The minimum frame rate results make it look like there are significant slow-downs, but the frame rate over time chart shows that this is a single instance at the start of the race (except for Nvidia’s GeForce GTX 960, which struggles throughout). But even the 960 feels smooth enough from start to finish, despite a number of missed frames reported by Fraps.

Making Sense Of The Benchmarks

As much as we want to derive meaning from the tools available to us today, Fraps is clearly painting a performance picture that doesn’t correlate to experiencing Rift first-hand. We have no doubt that it’s accurate at the point in the pipeline where it intercepts Present calls. But so much happens afterward that it isn’t aware of.

For now, we can use these numbers to agree that Oculus’ recommendations are roughly on-target. From Nvidia’s line-up, a GeForce GTX 960 is weaker than you’d want for some of the Rift’s launch titles, and there’s only so much the platform can do to compensate. A 970 seems more appropriate. However, knowing that this is the ground floor, we really would want a GeForce GTX 980 or 980Ti installed. AMD may have some more optimization to do; we’re really wondering what changes made it into the 16.3.2 driver that might have put AMD’s Radeon R9 380 on equal footing with a GTX 960, particularly in Chronos, where even the R9 390X showed signs of stuttering in real-world game play.

We do want to emphasize that the consequence of too-little pixel-pushing performance in VR is more dire than coming up short of 60 FPS on a conventional monitor. At which point you start skipping frames, VR quickly becomes uncomfortable. After days of experiential testing, Kevin started finding situations that'd make him queasy, and the effect was powerful enough to turn him off of the Rift for hours. And it didn't take long for Angelini to develop a headache while testing the slower cards in our collection. In short, don’t try to cheese Oculus’ recommendations. You need to shade ~400 million pixels per second, plus or minus 50 million pixels or so. The only way to do that is with fast, fast graphics.

Of course, as more information reaches us, we’ll be re-running tests, updating results and, hopefully, adding metrics derived from being able to measure more of the VR experience.

What’s In A Platform?

The VR-ready PC we received from Oculus employed a Skylake-based Core i5. Our lab machine is armed with a Haswell-E-based Core i7. Is one better than the other? Originally, we wanted to run some numbers comparing Haswell-E, Skylake, Haswell, and Piledriver via the FX. Although time constraints and a disappointing lack of useful performance data kept us from getting there, we still wanted to broach the subject since it’ll undoubtedly affect purchasing decisions.

In short, don’t assume that Intel’s workstation-oriented platforms are going to be better for VR just because they include more cores and PCIe connectivity. If the performance of a single thread is keeping you from getting a frame out, you want the architecture offering the greatest IPC throughput and highest clock rate. This applies to PC gaming in general, but because VR is so latency-sensitive, it’s particularly noteworthy now. A fast four-core Skylake-based host processor should be best.