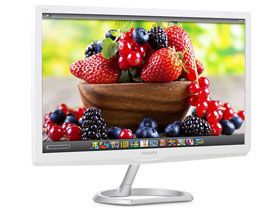 Philips' 276E6 offers a wide gamut at a low price but it doesn't quite qualify as a professional display. However, it does produce a super-bright saturated image with brilliant color, great depth of contrast and sharp detail. If you're looking to go beyond sRGB and you want to save a few bucks, this is a great choice.

For decades displays have been saddled with first the Rec.601 and now the Rec.709/sRGB color gamut. When looking at the spectrum of color visible to the human eye, these gamuts represent just a fraction of it. Newer standards like D-Cinema, Adobe RGB and Rec.2020 attempt to increase the amount of color presented by a display but current technology is still a limiting factor.

Adobe RGB monitors have been around for many years but typically the wide-gamut option is found only in expensive professional products. This is practical in that most content, both graphics and video, is mastered to the Rec.709/sRGB standard. The ideal image in our minds is one where the content and display conform to the same parameters for color, white point and gamma.

But it's also important to push the envelope so that someday we might actually have screens and content that can reproduce the full spectrum of visible color. Today, we're looking at a new technology that has the potential to take us a few steps closer to that goal: the Philips 276E6.

The 276E6 has a lot in common with other IPS desktop monitors. It's a 27-inch 60Hz screen with FHD resolution and an LED backlight. But the similarity ends there. Philips bills it as an Adobe RGB display but as we discovered in our tests, that's not the whole story. What's showcased here is an all-new addition to the backlight: Quantum Dots.

To achieve the necessary wavelengths for a wider color gamut, most Adobe RGB screens use a GB-r or RGB LED setup. Both employ diodes of different colors to augment the filters used in the liquid crystal layer. This approach is both expensive and power-hungry. With Quantum Dots you truly can have your cake and eat it too.

In simple terms, Quantum Dots absorb short wavelengths of light and convert them into longer ones thereby changing the emitted color. In Philips' implementation, the Dots are placed in a sealed glass tube and installed atop blue LEDs. A three nanometer dot emits green light and a seven nanometer dot produces red. When combined with the backlight's native blue, you get white with narrow spectral peaks. It is these peaks that expand the color gamut. And it's done at a lower manufacturing cost with less power consumption.

To highlight the extra color available in the 276E6, Philips has broadened its implementation of the Adobe RGB gamut. You'll see in our tests that the display produces a good deal more red saturation than the standard calls for. What results is a screen that isn't necessarily accurate but it is beautiful. Images are rich and deeply detailed beyond what one sees on a typical sRGB monitor. It's not a picture you'd want in a professional product but as a general use and entertainment panel, you won't see anything else quite like it.

There's another technology here that we haven't seen before: IPS-ADS. ADS stands for Advanced Super Dimension Switch and takes IPS to another level with lower power consumption and improved viewing angles. It also moves the liquid crystal molecules with greater efficiency resulting in faster panel response.

Our tests revealed some interesting things and it's pretty easy to understand Philips' design intentions once you see the monitor in action. The 276E6 certainly is unique and appealing so the best thing now is to take a closer look.

Next Page Packaging, Physical Layout And Accessories
21 Comments Comment from the forums
Be In the Know