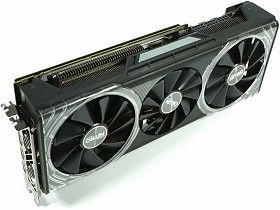 Sapphire put a lot of effort into getting Radeon RX Vega 64 right, even as its competition struggled with Vega 10. The Nitro+ card is well-built, cool, quiet, and fast. Granted, it's also huge, expensive, and heavy. But those are all trade-offs for this Sapphire card's strengths. We're not sure everyone will want to pay $660 for what the Radeon RX Vega 64 Nitro+ can do, but for those who do, we're sure you won't be disappointed.

Sapphire took its time getting a home-grown Radeon RX Vega card to market, and that's not a bad thing. While some competitors sneakily seeded production validation test boards (the ones that precede mass production), Sapphire kept to itself and made sure the Radeon RX Vega 64 Nitro+ was running well. When you think back to the issues those leaked cards demonstrated, Sapphire did well to keep its efforts quiet until the right time.

Of course, the factory making these cards got plenty of experience with AMD's reference Radeon RX Vega 64 boards. Sapphire goes even further than AMD, though, serving up its own cooler and a bespoke PCB.

The combination of custom design and aftermarket heat sink combine to create an almost-1.6kg behemoth. Wisely, Sapphire bundles a bracket to keep a sagging card from tugging on your PCI Express slow.

Measuring 31cm long, 13cm tall, and 4.8cm deep, this is technically a 2.5-slot card that ties up three slots worth of expansion on your motherboard. Additionally, a plate tacked on to the back side ties up another 0.5cm, meaning you'll need to leave room behind the Radeon RX Vega 64 Nitro+, too.

Dropping this card into your first motherboard slot may consequently result in a tight fit. You'll want to be careful with its height too, since the 13cm measurement doesn't take into account another 3cm or so for cables that stick straight out from the top.

The Sapphire logo under the backplate features RGB lighting, meaning it can be color-coordinated or switched off altogether.

Of course, Sapphire includes the requisite software for blinging its board out. As you can see, the interface is fairly straightforward.

The fan shroud is made of black plastic. There are two transparent rings around the larger fans, which sandwich a smaller one in the middle. Without power, this looks a little strange. But that changes once the card roars to life and Sapphire's RGB lighting makes its presence known. By default, you're greeted by a bright blue hue.

Up top, the card is dominated by no fewer than three eight-pin auxiliary power connectors and a back-lit Sapphire logo. Again, the standard setting is bright blue. Choosing any other color requires Sapphire's software.

Looking at Sapphire's Radeon RX Vega 64 Nitro+ from the side reveals vertically-oriented heat sink fins that are bent a bit above the GPU. This guides airflow a bit, and increases the surface area for cooling. The back end is all but closed due to those vertical fins.

At the other end, a slot bracket hosts two DisplayPort 1.4-ready outputs and two HDMI 2.0 connector. There is no DVI-I connectivity, leaving more room for ventilation. Unfortunately, the way Sapphire positioned its heat sink fins, there is no real flow out the back. Instead, heated air exhausts down, toward your motherboard, and up, back into your case.