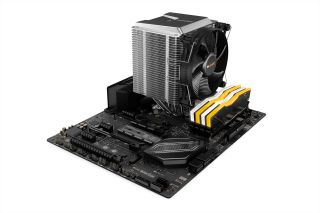 When buying a CPU cooler, it's important to make sure your selection is able to clear the system's RAM. That typically isn't an issue when using standard-size or slim DIMMs, but with taller modules, it's something you'll want to double-check before making a purchase. Today, be quiet! aimed to solve this problem with the introduction of its Shadow Rock 3 CPU cooler, which has a unique asymmetrical design.

Rather than having a cutout right by the memory or ensuring you can mount the fan high enough to clear the RAM modules, the entire cooler is pressed back towards the rear exhaust of the chassis. It's pushed so far back that even the cooler's fan clears the RAM modules, which ensures you can have memory of any height and that the sticks remain visible, which is especially great if you have RGB modules.

Beyond that, the cooler features quite a standard design, with copper heatpipes plated in nickel that extract the heat from the CPU and guide it toward the aluminum fin stack. The heatpipes might only be 6mm thick, but there are five of them to distribute heat equally through the 30-fin stack.

The Shadow Wings 2's 120mm PWM fanpushes heat away and spins at up to 1,600 RPM. Unfortunately, be quiet! did not specify a minimum speed, though as noise levels are quoted to be limited to 24.4dBA at full speed, we doubt noise levels will be a concern at lower speeds.

The cooler is said to be capable of dissipating up to 190 watts, which is more than plenty for all but the hottest running CPUs around today.

The Shadow Rock 3 is compatible with all modern CPU sockets outside of AMD Threadripper systems and comes with everything you'll need for installation, including thermal paste, the backplate and mounting kit, as well as a screwdriver that's long enough to reach through the entire cooler to secure the final bits during the installation.