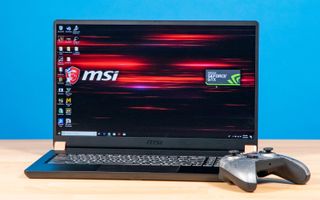 For the rest of the month, MSI’s Intel and Nvidia-powered GS75 Stealth gaming laptop is $300 off on Newegg.

This laptop normally sells for $2,899, but is now marked down to $2,599, making for a total 10% discount. With a 9th Gen Intel Core i7 CPU, Nvidia GeForce RTX 2080 Max-Q GPU, 32GB of memory, a 1TB SSD and a 144Hz display, this laptop focuses on packing high performance into a sleek, classy exterior that doesn’t immediately shout gamer. Hence the name.

MSI GS75 Stealth: was $2999, now $2,599 at Newegg
The MSI GS75 Stealth is a powerful gaming laptop with a more subdued look. On the highest settings in the most demanding recent games, it consistently beats out the competition for frames. According to our review,  “the Stealth is not only a looker, it’s a slim performer, too.”View Deal

In our MSI GS75 Stealth review, it beat the category average for performance in Shadow of the Tomb Raider’s highest settings benchmark by 16 frames, giving it a score of 68 fps over the average of 52. It also hit 109 fps on Hitman’s ultra settings, beating out the 97 fps average.

Right now, this makes it one of the best gaming laptops available, with parts that will be cutting edge until Intel Comet Lake and Nvidia RTX 3080 or AMD Big Navi hit the market. None of those have official release dates yet, so if you need to upgrade before then, this is a solid buy.