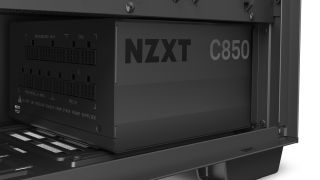 Update 1/21/2020 12:00 p.m. ET: Thsi article originally stated that the new PSUs are available now. NZT has informed us that the C-series PSUs are only on preorder now and will ship next week.

NZXT didn't make many waves at CES, but now that things have quieted down, the company is using the calm to draw some attention to its new C-Series power supplies and the NZXT RGB & Fan controller unit.

The C-Series power supplies are the company's new units that use Seasonic as their OEM, so you'll be able to have faith in the units despite that NZXT only started selling its first E-series power supplies less than two years ago when we reviewed the 850W unit from the E-Series.

The company's C-Series units will be available in 650W, 750W, and 850W variants, known as the C650, C750, and C850, respectively. They come with 80-plus Gold certification, along with all the expected protection circuitry such as UVP, OVP, temperature protection, short-circuit protection, and more.

For lovers of quiet systems, NZXT has equipped the C-Series PSUs with an optional Zero-RPM fan mode. This mode can be enabled or disabled with the touch of a button, and when enabled, it will ensure the 135mm FDB fan doesn't run when the PSU is running at lower loads or temperatures.

As we would expect from any high-end PSU released nowadays, the units are fully modular.

In addition to the new power supplies, NZXT also wanted to make it a little easier to control your RGB ecosystem and cooling system through its CAM software, so it introduced the very uncreatively named 'NZXT RGB & Fan Controller.' This device does exactly what you would expect and controls two RGB lighting channels with up to 40 individually addressable LED's each and three fan channels with a maximum output of up to 10W per channel.

With their 80-LED support, the lighting channels can support up to six of NZXT's RGB LED strips or the lighting of five Aer RGB fans. If you want to expand beyond these capabilities you'll need multiple units.