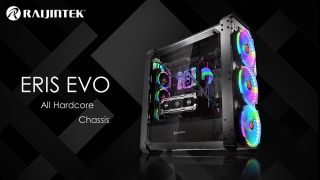 We don’t often hear from Raijintek, but when we do, they often have some unusual but very cool new products. Today’s no different, with the company introducing its Eris Evo chassis, as spotted by ComputerBase.

The Eris Evo is another case of Raijintek going over the top, and then the designers thought: “this is still not enough” and continued further. Meet a chassis that can house two computers, up to 20 fans (although we’ve come up with 26 based on what we see), as well as quad-SLI or dual-vertically mounted graphics cards.

From an initial standpoint in the pictures, the case looks like a fairly regularly-sized case too until you look closer and inspect the spec sheet: it’s almost a foot wide, and its height and depth measure well over two feet in each direction. It has room inside for EEB motherboards, E-ATX, ATX, and Micro ATX boards. If you’re using Mini-ITX, you’ll be able to cram two systems into it, and the same goes for the power supplies: it can house two of 'em. CPU coolers can be up to 170mm tall, and graphics cards up to 512 mm long.

Of course, you’d be silly to use a heatsink to cool your CPU; the case is clearly designed for the most absurd liquid cooling loops. The front and rear of the chassis each support radiators in the following sizes: 120mm, 140mm, 240mm, 280mm, 360mm, 420mm, 480mm, 560mm, and 600mm.  The top will support radiators up to 480mm in length, and it doesn’t stop there. Behind the motherboard tray (I’m not kidding), you can fit up to two 360mm radiators. This means that if somehow you were so inclined, you could fit up to 7.9 feet of radiators in this chassis – that’s about as much as the height of a normal room. To get the water-cooling lines behind your motherboard tray there are four passthrough gaps in the motherboard tray.

The structure itself is built from 3mm thick aluminum and 2mm thick SPCC steel. This, together with 4mm thick tempered glass panels, bring it to a total net weight of 48 lbs. Full of hardware, it will probably weigh more than a child, so we would not recommend this chassis if you often attend LAN parties.

Because of the rather modular design, Raijintek has equipped the case with a movable front I/O box, which you can attach in various different spots of the chassis to meet your needs.  On it, you’ll find four USB 3.0 ports and a 3.5mm HD audio jack. Due to the large rear radiator support, all the rear I/O connectivity of your devices to your motherboard and graphics card will have to happen inside the chassis – which will likely require quite some flexibility and small hands to pull off once everything is installed.

All things considered, we can hardly come up with a reason for anyone to need this much chassis, aside from “because I can.” That said, the “can” part would require quite the means: the chassis itself will set you back €350 Euro (about $390), and you’ll probably need another four or five grand to populate the system fully.