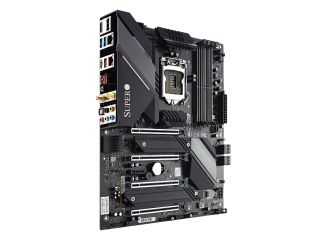 If you haven't heard of the gaming brand SuperO, we wouldn't blame you. Supermicro's gaming division isn't very well-known in the Western market. Nevertheless, SuperO's latest motherboard is pretty interesting. The Supermicro SuperO 9Z490-PGW is a high-end board with a total of four PCIe 3.0 slots, as spotted by Hermitage Akihabara. It is built on the new Z490 chipset with an LGA1200 socket, and, thus, for use with Intel's upcoming Comet Lake-S CPUs.

Typically, the Z490 platform doesn't support this many PCIe 3.0 slots. There are some boards that have this many slots, but few of them actually have all 16 lanes accessible on each slot. Supermicro's trick is to use a PLX lane switch chip, which essentially splits the PCIe lanes from the processor into multiple lanes. This overcomes lane restrictions put in place by graphics cards. Bandwidth per card is still limited.

Next to that unique feature, the board comes with all the standard goodies you would expect on a Z490 motherboard, including Intel i219V Gigabit Ethernet, Bluetooth 5.0, 802.11ax WiFi, four DDR4 RAM slots, dual M.2 slots and "enterprise quality" VRM circuitry. Iteven comes with 10 Gigabit AQC107 Ethernet built by Aquantia. A Realtek ALC1220 chip on a dedicated portion of the board handles audio.

Intriguingly, despite its high-end positioning, it appears that the SuperMicro C9Z490-PGW doesn't come with RGB lighting. This paired with the PLX chip tells us that despite being labeled as a "gaming" motherboard, the new SuperO Z490 board is fit for a professional audience too.

There's no word on pricing yet. However, PLX chips have become quite expensive in recent years, so don't expect this board to come cheap.