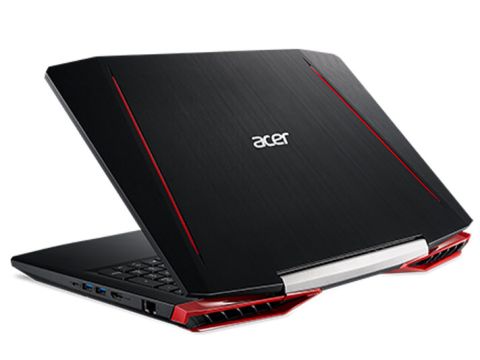 We weren't expecting top performance from the Aspire VX 15, and sure enough, it caromed around the bottom during just about all of our synthetic benchmarks, although it kept up with the Dell Inspiron 15 7000 in the CPU-oriented tests, given that both contain the Intel Core i5-7300HQ.

The Acer VX 15 excelled in a handful of games, particularly titles that don’t require lots of GPU horsepower. This includes Alien: Isolation and Bioshock Infinite, where we saw the GTX 1050 maintain over 60 FPS. However, the budget-oriented laptop simply couldn’t handle most of our demanding modern titles. In some cases, such as DiRT Rally and Hitman, we saw the Acer laptop reach at least 30 FPS, but heavier titles like Ashes of the Singularity and Grand Theft Auto V require a significant drop in settings to achieve a respectable frame rate.

The bigger upside to the Acer VX 15, besides its price, is that its lack of high end components also means less heat generated. Our Furmark torture test put maximum temps at impressively low marks, even below those of the Dell Inspiron, which had previously impressed us with its cool demeanor. Alongside the Acer's low heat generation is its long battery life, which again exceeded that of the Dell laptop, which was our champ in this value-based grouping until now.

The Aspire VX 15 FHD IPS display with Acer’s ComfyView is essentially a matte, anti-glare surface. This also surprised us, compared to the Dell Inspiron, with its TN panel. The Acer laptop's contrasts are good, but there's room for improvement on contrast ratios at both minimum and maximum luminance. The low average gamma also results in a less saturated image with high gamut luminances. Grayscale errors are kept relatively low and almost unnoticeable, but the overall color errors were far too high and noticeable.

In all, the VX 15’s display is still much better than the Dell Inspiron’s in terms of accuracy, which you'd expect when considering that it's an IPS panel, but which you wouldn't expect given its low price tag.

Unfortunately, the low price is also reflected in the Aspire’s build quality. The brushed plastic lid exhibited quite a bit of flex, which is a concern since it’s responsible for protecting the laptop’s display. The part of the chassis surrounding the keyboard and trackpad was also flimsy, and applying even a moderate amount of pressure would flex the plastic; in fact, opening and closing the lid would stress the plastic. The bottom panel was much more robust than the rest of the system, and we wish the chassis as a whole was just as sturdy.

Still, the Aspire VX 15’s biggest feature is its price. At $800, the VX 15 beats the Dell Inspiron by $100, making it the lowest-priced laptop to land in our lab, and in many ways makes the two direct contenders. For $100 less, you get better thermal dissipation, longer battery life, and an IPS display with excellent viewing angles. The trade off, of course, is less GPU power, which in certain games means the difference between playable and unplayable. The Dell also offers significantly better build quality, which rivaled that of laptops several hundred dollars more.

The next logical upgrade is to jump from an i5-7300HQ to an i7-7700HQ, which is what the Sager NP6852 offers. This won’t make much of a difference when you’re gaming, but CPU-based tasks will be handled more efficiently.

The Acer aims to capture the entry-level market, and it does so both in price and performance.

Prev Page Battery, Thermal, And Display Testing
7 Comments Comment from the forums
Be In the Know