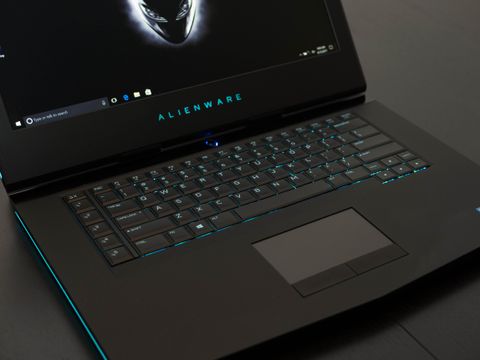 To ease our way into the gaming benchmarks, we have Alien: Isolation, in which just about any modern gaming system can succeed. The GTX 1070-based laptops produce a tight performance spread, with the Alienware 15 scoring about 2% slower than the Asus Strix GL502VS-DS71 and about 6% slower than the EVGA SC17. The 5 FPS discrepancy between the Alienware and Asus are easily chalked up to margin of error, but the EVGA's 10 FPS lead is much more substantial, and likely due to the overclocked i7-6820HK. The Sager NP8156 trails by about 23%, but 140 FPS is nothing to scoff at.

In Ashes of the Singularity, the Alienware laptop takes third place yet again by a handful of frames, but all three of the GTX 1070 laptops will require an extra ounce of performance to surpass the 60 FPS threshold; even the EVGA i7-6820HK only provides an additional 3 FPS. To achieve 60 FPS, you'll have to dial back a few settings, such as anti-aliasing. The same can't be said for GTX 1060-based laptops, however. The Sager delivers 10 FPS less than the Alienware system, which amounts to about 21% less performance. The graphical compromises the Sager will require to reach 60 FPS will be greater.

Bioshock Infinite is similar to Alien: Isolation in that high frame rates are easy to achieve, so your biggest bottleneck will be your CPU. The Alienware and Asus Strix produce virtually identical results, but the EVGA SC17 pulls a 7 FPS lead. It should be noted that the GTX 1070 provides just enough performance for the Alienware laptop to match its 120Hz refresh rate.

DiRT Rally tells a similar story, with the Alienware 15 taking second place and the Asus trailing by a hair's width. The EVGA SC17 takes the lead once more because of its more robust processor, but only by a couple of frames. On the other hand, the NP8156 and its GTX 1060 score between 26% and 28% slower than the GTX 1070-equipped competition, which pulls its performance below 60 FPS. It can easily surpass that with light tweaking.

During our review of the Acer Aspire VX 15, we introduced test results based on reduced graphical settings if a laptop failed to achieve an average FPS of 45. GTX 1070-based laptops usually pass this minimum requirement in our benchmarks, save for one game.

Grand Theft Auto V has the distinction of being one of the most demanding games in our suite, and even the most powerful laptops will have to cut back on graphics settings to maintain a solid 60 FPS. In most scenes, the Alienware, Asus, and EVGA systems maintain above 45 FPS, but during the Vinewood Sign scene, their averages fall well below that. This is because the scene renders many distant objects and landscapes, which taxes resources considerably. By reducing the benchmark settings to the normal preset, we're able to breeze by 45 FPS. Unfortunately, we don't have reduced setting data for the SC17 or NP8156, because we've sent them back.

GRID Autosport performance is platform-based, but oddly enough, it gives systems with high GPU clock rates a slight edge. The Alienware manages to maintain over 90 FPS average, and never dips below 60 FPS. However, the Sager NP8165 comes dangerously close to matching it; in fact, it scores only about 7% slower than the Alienware. By comparison, the SC17 scores about 8% higher than the Alienware, or about 15% higher than the Sager. If titles like GRID are your games of choice, there isn't much incentive to consider a GTX 1070 laptop, especially when a GTX 1060 laptop nearly matches it.

Hitman is another fairly platform-based title, but it places more emphasis on CPU prowess. The Alienware and Asus land in the same territory, with the performance difference between the two essentially negligible. However, the i7-6820HK-based EVGA scores between 15% and 18% higher than either the Alienware or Strix. If you need as much power as possible and money isn't a major issue, an overclockable mobile processor might just be your ticket. If you don't need as much power, the Sager performs admirably, maintaining a 60+ FPS average.

The next three titles are heavy hitters, and you'll need all of the system resources you can muster to maintain an optimal frame rate. In Metro: Last Light Redux, the Alienware 15's configuration is capable of at least as much, maintaining 60 FPS with some performance to spare. If you need an extra ounce of performance, the EVGA SC17 will push the frame rate past 70 FPS. We should note that you'll need at least a GTX 1070 to maintain 60 FPS at high settings; unfortunately, the Sager and its GTX 1060 don't quite cut it unless you're willing to drop anti-aliasing.

Similarly, Rise of the Tomb Raider is an incredibly taxing game, but it's more GPU-heavy than Metro. As such, the Alienware, Asus, and even EVGA score within less than a frame of each other. The GTX 1070 doesn't have the GPU horsepower necessary to bring your frame rate past the 60 FPS threshold; you'll need a laptop with at least a GTX 1080 for that. Luckily, the GTX 1070 has enough horsepower to reach 60 FPS with only minor tweaks to settings. The same can't be said for the Sager, which falls well below 45 FPS. You can certainly achieve 60 FPS, but the visual degradation will be more noticeable than in a system such as the Alienware 15 laptop.

Performance in The Division relies heavily on GPU horsepower as well, although it isn't as taxing on your GPU as Rise of the Tomb Raider. This allows a system with an i7-7700HQ and at least a GTX 1070 to shine. If you're working with a budget, the Asus might be your best bet; the Alienware and EVGA come at a price premium due to their additional features and build quality. Considering how even the three laptops are, neither of the more expensive laptops will be worth the price if this game is your favorite. If you're really short on change, the Sager will produce decent results, but not within the coveted 60 FPS range that the GTX 1070 can offer.

To finish our gaming benchmarks, we have Thief, whose workload is relatively lax compared to some of our previous titles. Once again, the performance difference between the GTX 1070-equipped laptops is negligible. Unlike our results in The Division, Thief proves easy enough for systems with GTX 1060s, so the NP8165 proves to be a compelling alternative.

Prev Page Synthetic Benchmarks Next Page Battery, Thermal & Display Testing
18 Comments Comment from the forums
Be In the Know