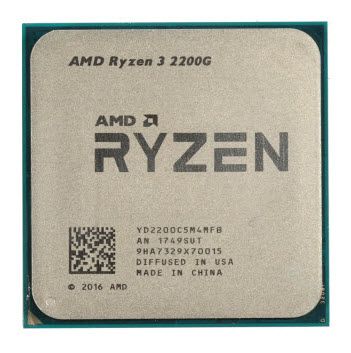 Ryzen 3 2200G effectively ties the Ryzen 3 1300X in Cinebench's single-core test, and then carves out a slight lead in the multi-core metric.

Meanwhile, Intel's Pentium G4620 trails in the parallelized workload. But strong per-core performance gives the little Pentium an advantage in lightly-threaded tasks; it even beats a stock Ryzen 5 2400G in the single-core benchmark. These same observations carry over to the other benchmarks, too.

Ryzen 5 2400G's SMT technology allows it to dominate the Ryzen 3 2200G in threaded workloads, while the 2200G maintains a lead over Ryzen 3 1300X in most of those same tests. These benchmarks are driven by host processing, so the 2200G's available power is dedicated to the Zen cores, facilitating the newer chip's win.

AMD's Ryzen 3 2200G matches the Ryzen 3 1300X in compression and decompression workloads, again indicating that its execution cores (and single CCX configuration) are far more potent when the graphics engine is idle.

The Pentium G4620 struggles mightily through this round of testing due to its dual-core design.