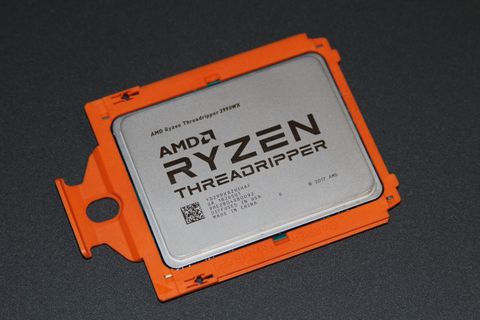 At first, we were amused by AMD's suggestion that these new Ryzen Threadripper CPUs could be cooled effectively with heat sinks and fans. But wouldn't it be something if the company's representatives were correct and we could cover the 2990WX with a beefy-enough sink to keep it running at full speed under load, without throttling issues? After all, we've already seen Intel's flagship stagger under the limitations of thermal grease between its heat spreader and die. Might AMD's use of Indium solder pay off during such an experiment?

Air Cooling And Its Limits

Although the Cooler Master-supplied heat sink is plenty capable, we have to imagine anyone willing to air-cool such an expensive CPU probably wants a potent Noctua sink with a quieter fan instead. What annoyed us most about AMD's provided cooler was the sleeved cable coming out the side facing your first PCIe add-in card. If you put a thick, high-end board in that first slot, then the cooler's USB port is completely covered and no longer usable. Additionally, a graphics card with a backplate touches the sink, which shouldn't happen.

At this point, we're switching to water cooling, and once the thermal limit of these processors is reached, we'll use an even more powerful chiller system.

Of course, if you're hoping to realize the maximum benefit of XFR2 and PBO, it's important to use the right cooler, and to back it with a high-end power supply. After taking the 2990WX to its limits, we hooked up the chiller and measured more than 42A of current on the motherboard's EPS connectors. Under LN2 cooling, current draw exceeded 50A and we had to circumvent the motherboard's 500W limit.

Both models appear to use a new temperature detection and reporting mechanism compared to the previous generation. Although we do see a 27°C-higher Tctl value, it only exists for backward compatibility on functions like the fan control circuit. Otherwise, both Threadripper models have an upper Tdie limit of 68°C, which would yield a Tctl value of 95°C. Tctl is therefore no longer a measured variable.

The curves for Ryzen Threadripper 2990WX appear in the graph below. With the heat sink/fan and closed-loop liquid cooler, this 32-core beast doesn't get very far under a taxing load.

It's easy to applaud Ryzen Threadripper 2950X's performance, since you don't have to put as much effort into cooling it. Whereas the 2990WX quickly ran out of steam under air or a closed-loop liquid-cooling setup, this model behaves well even if you top it with an all-in-one setup.

While a tuned Ryzen Threadripper 2950X can be cooled at just over 250W using a heat sink and fan (and still operate properly), you really want a liquid-cooler of some sort to get the best performance from it. But without PBO enabled, air cooling is effective enough, even up to 180W.

When it comes to Ryzen Threadripper 2990WX without PBO turned on, it's possible to hit that same 250W threshold and achieve sufficient cooling performance with a heat sink and fan. If you want to overclock much further, invest in a more capable thermal solution.