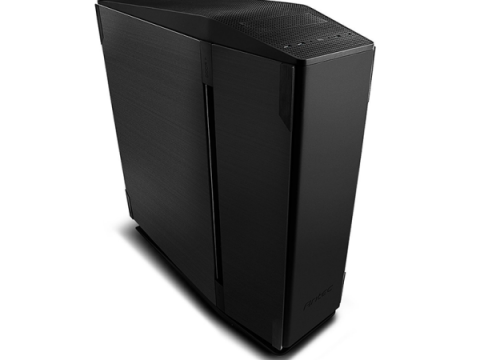 A new case form factor emerged way back in 2008 when Foxconn announced a 14.4" tall (server guys call this "width") motherboard design that it never actually produced. Several case manufacturers hopped aboard the "Ultra ATX" bandwagon with 10-slot models, and those same cases later became a great place to put 13.6" by 10.6" XL-ATX boards. The rest of that story quickly became history as motherboard manufacturers tried once again to shrink the boundaries of their boards to something that resembled ATX, and eventually combined the 12" height of standard ATX with the 10.6" depth of XL-ATX. Some of these boards had a graphics slot in the bottom, so case manufacturers responded with 8-slot cases supporting boards up to about 11" deep. And then, for the most part, they stopped.

Lacking an official form-factor for 12" by 10.6" motherboards, motherboard manufacturers started labeling these "EATX." The problem for case manufacturers is that to qualify for the EATX label, they needed room for a 12" by 13" board. Suddenly, people weren't buying the cases that were specifically designed to support their 12" by 10.6" boards, for the simple reason that the case was labeled ATX and the board EATX. From a marketing standpoint, the only option available to case manufacturers was to scrap existing "right sized" cases and come up with new EATX-compatible models.

Enthusiasts still need more expansion slots than specified by EATX, and Antec is the third company in our review series to combine all of the maximum dimensions needed for the full range of enthusiast-class consumer hardware.

The S10 is both EATX and Ultra ATX, supporting boards up to 13.5" deep and 14.4" tall. Knowing that enthusiast "EATX" boards aren't EATX, Antec offers that space as a place to put large cooling components. The company was even able to keep the total depth of the case below 24", just so that it will fit under your desk, by leaving out front-panel bays that many enthusiasts believe to be clutter.

The S10 still has provisions for front-panel 5.25"-format devices on the top panel, but this bay is only 3.5" deep. That makes it suitable for many fan controllers and port panels, but unfortunately not large enough for the Asus OC Panel that comes with its Rampage V Extreme. We knew a few of you were thinking about that.

A closer look at the S10's 3.5"-deep 5.25" bay also shows its stealthy power and HDD LEDs, which shine through tiny access holes.

The large gap that separates forward (drive bay) and rear side panel sections serves as an intake vent for the S10's trio of 120mm front-panel fans, which are served by a slide-out air filter and can be moved upward to make room for the lower tank of a 3x 120mm radiator. The maximum-supported total radiator length is about 16", maybe a fraction more depending on the shape of the top tank.

In addition to supporting motherboards up to 13.5" deep, Antec's S10 has ten ISA slots. That's my cheeky reminder that even though Antec calls these PCI-Express slots, any device that conforms to the legacy ISA bracket standard (including PCI cards and slot fans) will fit.

Antec designed the S10 with separate HDD and motherboard cooling zones and cooling directions. A bottom-mounted exhaust fan in the forward section draws air through vents in the top panel and past vertically-mounted drives, defying "convectional wisdom." A filter at the top of the drive cages catches any dust that hasn't already stuck to top-panel vent holes.

A plastic gate opens at each of the three sections to allow access to two 3.5" drive trays and a 2.5" drive slot. That's six 3.5" drives and three 2.5" drives in the front section, along with the slide-in filter shown at the top of the photo above.

The S10's power supply section contains a second cage able to hold five additional 2.5" drives, and the tray separating upper and lower sections has both a wide slot for power supply cables and a small one to ease the grasping of drives.

The S10 power supply bay features both a pull out filter and foam vibration-dampening. Lower hinges are also shown, into which catch tabs of the side panels engage.

S10 top panel fans are attached to a drop-down tray with screws on the left edge and catch tabs on the right. This panel supports both 140mm (included) and 120mm fans, and has enough space above the motherboard to add a 1.2"-thick radiator.

Next Page The Build, Test Results And Conclusion
23 Comments Comment from the forums