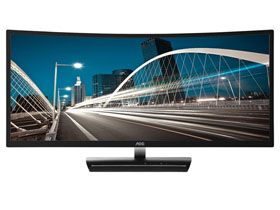 We have a decent number of curved gaming monitors in our database so today’s battle pits AMVA against IPS. All three of the former are based on the same AU Optronics part running at 2560x1080 resolution: Acer’s Z35 and BenQ’s XR3501 plus our review subject. At a higher price point we have IPS panels with 3440x1440 pixels: Acer’s XR341CK and Predator X34 plus LG’s 34UC98. All have some form of adaptive-refresh except the BenQ which simply offers 144Hz.

Output is no problem for any of these monitors. They’ll all provide lots of light for any environment you care to use them in. The C3583FQ runs mid-pack here and it seems the AMVA monitors are a tad brighter than their IPS counterparts. This result represents the Standard picture mode. If you choose the color-accurate sRGB preset, you’ll be fixed at 300cd/m2.

The real story here is black levels. AMVA offers the best blacks of any LCD variant. Acer manages to coax a slightly lower threshold out of its Z35, but the AOC is very close behind; too close to actually see a difference in fact.

The resulting contrast ratio is more than double what you’ll get from the best IPS screen. And this is something you can plainly see. The picture has far more depth and looks bolder regardless of brightness or type of content. All we need now is greater resolution, though the C3583FQ’s 1080-pixel vertical spec has a major speed advantage over its 1440p competition thanks to its higher refresh rate.

Dropping the backlight to zero brightness results in an almost-ideal 46.2413cd/m2. It’s a great way to play in the dark, and the AOC’s extra contrast means you’ll have no problem picking out fine shadow and highlight details.

The IPS-based Acer X34 wins the minimum black level comparison because its backlight bottoms out at an extremely low value, 16.9100cd/m2. The three AMVA screens, on the other hand, are completely usable at their minimum settings.

Though all three AMVA products use the same panel part, Acer has managed slightly better contrast performance across the board with its Z35. This doesn’t diminish our enthusiasm for the C3583FQ however. With a low price and FreeSync capability, it’s an extremely compelling choice for gamers.

The above results represent our calibration of the Standard mode. Since sRGB is locked at 300cd/m2, we couldn’t use it to make a fair comparison. Its contrast ratio is about the same as Standard, 2109.4:1. Adjusting the RGB and contrast sliders doesn’t take away any of the C3583FQ’s excellent image depth. Black levels remain deep and are only bettered slightly by the Z35. While the super-high numbers posted by the Acer are attractive, it will cost you a bit more money.

ANSI contrast is also extremely consistent and shows us that no corners have been cut in the C3583FQ’s engineering or manufacturing. In fact, the difference is less than 9%, or in other words, a wash. This is why we like AMVA screens and why we’re willing to give up pixel density in favor of greater dynamic range. It won’t be mistaken for an OLED or plasma screen, but right now, this is as good as LCD gets.

Prev Page OSD Setup And Calibration Next Page Grayscale, Gamma And Color
33 Comments Comment from the forums
Be In the Know