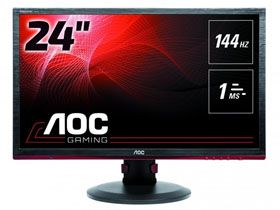 To read about our monitor tests in depth, please check out Display Testing Explained: How We Test Monitors and TVs.  Brightness and Contrest testing is covered on page two.

We had to reach back in time a bit to find five more 24-inch TN gaming monitors. With such an emphasis on premium displays lately, there aren’t many decent value choices. Today’s group consists of BenQ XL2420G (G-Sync) and XL2430T (144Hz), ViewSonic XG2401 (FreeSync), LG 24GM77 (FreeSync), and Nixeus NX-VUE24A (FreeSync).

The Nixeus is the only screen that doesn’t put out a ton of light. The rest easily exceed 300cd/m2, and the AOC easily beats its claimed brightness spec. The G2460PF’s black levels are only fair but the resulting contrast comes close to our 1000:1 preference. Remember that it’s the least-expensive product here today. This is more than acceptable performance.

Turning down the backlight to zero only brings output to 164.1621cd/m2. We’d like to see it lower than that; at least 80cd/m2, if not 50. The upside is that light can be very precisely controlled, but if you prefer to play in the dark, the G2460PF might be a little too bright.

This doesn’t help it in the black level contest, but at least contrast remains consistent at a value very close to the maximum number. While that consistency is important, it would be nice to see the deeper blacks that would come with a wider range backlight control.

To achieve the best possible gamma and grayscale tracking, we had to drop the contrast control by seven clicks. While this helps color accuracy, it does rob the G2460PF of a little depth. Users may prefer to stick with the Standard mode and simply adjust brightness to taste. The only downside of that approach is slightly warm whites, which isn’t a big deal in this case.

The ANSI contrast value is a bit higher than the sequential number, which indicates a panel with good quality control and a properly installed grid polarizer. The G2460PF retains good delineation between contrasting objects without resorting to artificial enhancements like sharpness. Overall, we’re seeing the potential for good image depth here.