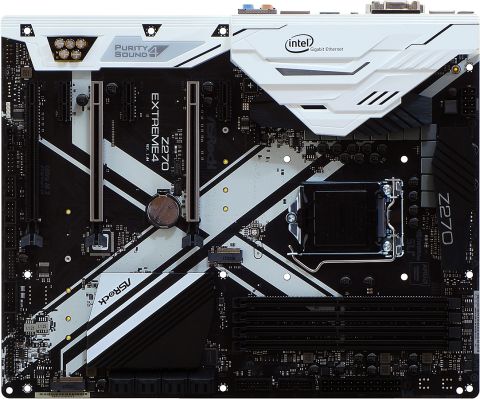 Although it's a mediocre overclocking motherboard, the Z270 Extreme4 is a reasonable reduced-price alternative to ASRocksâ€™ own Fatal1ty Z270 Gaming K6. Your choice should be guided by your preferred feature set.

Sometimes, the easiest way to create a motherboard at reduced cost is to leave a few features off one that already exists. A look back at the Fatal1ty Z270 Gaming K6 review shows that it had all the hardware, right down to a value price for its extra features. The only problem was that it throttled the CPU frequency down under extreme workloads, and thatâ€™s probably something that could be addressed in firmware. We donâ€™t have time to give most manufacturers a second chance when new firmware comes out, but thatâ€™s effectively what ASRock gets in this review of its nearly identical Z270 Extreme4.

These changes correspond to a $20 price reduction.

The two PCIe x16 slots that share lanes are still trimmed in stainless steel, and still convert from x16/x0 to x8/x8 connections when a card is detected in the second of these two slots. Cards with up to triple-slot coolers are supported.

All three of the PCIe x1 slots are open-ended to support cards that are longer than x1, and the bottom x16-length slot has four unshared PCIe 3.0 lanes with NVMe SSD support. Including the two PCIe 3.0 x4 M.2 slots, users can install up to three NVMe drives.

While none of the remaining PCIe slots are shared, the two NVMe-capable M.2 slots each share two HSIO resources with SATA 6Gb/s ports. That means installing two M.2 drives eliminates four SATA ports. Though an additional SATA controller adds two ports, it only operates from a single lane in PCIe 2.0 mode. So you can have three ultra-fast NVMe drives and four SATA drives installed, but two of those SATA drives will be sharing bandwidth over a single 5Gb/s pathway.

Two of the five PWM-style fan headers can be switched to voltage regulation mode, and both of those are rated for 1.5A to support pumps. If you only need one for your pump, the other might be useful for adding thermally-active fan speed control to a three-pin-powered case fan hub, such as the one found in SilverStoneâ€™s recently-reviewed Primera PM01. Employing that option requires a builder to track down a three conductor cable with two properly sized female ends.

Because it uses the same PCB as the Fatal1ty Z270 Gaming K6, the Z270 Extreme4 has the same layout benefits and drawbacks. Two different styles of header are available for two generations of Thunderbolt add-in-cards, the two USB 3.0 front-panel headers are both found just beneath the 24-pin power header and are fed by the chipset and a hub, and the most difficult drawback—a front-panel audio jack placed extremely far back on the bottom edge—is only a problem for those few builders whose cables came up half-an-inch short.

The biggest difference in the Z270 Extreme4â€™s packaging is that the box is turned sideways, compared to the Fatal1ty Z270 Gaming K6. Builders still get four SATA cables and an HB-style SLI bridge.

Next Page Z270 Extreme4 Software, Firmware And Overclocking
40 Comments Comment from the forums
Be In the Know