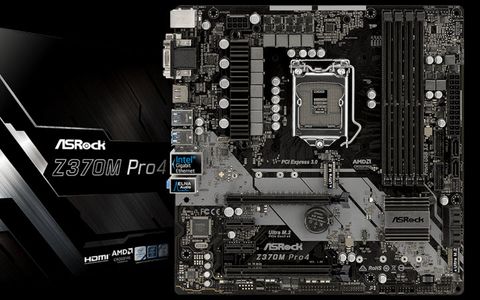 ASRock AppShop remains the download point for most of the firm's applications, and the installation DVD installed it only with ARock’s “Restart to UEFI” boot shortcut. We cropped extras, including shortcuts to freeware and a trial for Norton Security, out of our screenshot for scale.

ASRock A-Tuning still requires users to load a Turbo profile to access its auto-tuning algorithm, which reached a mere 4.5GHz by using an exceptionally high Load-Line Calibration setting from firmware to boost voltage from 1.22 volts (V) to 1.28V under heavy loads. Auto-tuning differs from the firmware’s 4.5GHz preset by not having any offset for AVX loads, which otherwise drops our CPU to 4.3GHz when running Prime95.

Manual tuning is another option available on the A-Tuning software, and we verified changes in multiplier, base clock and core voltage worked immediately. The System Info tab also worked well for the most part, though the program misreported both our DRAM data rate and voltage.

Clicking the F6 keyboard function key switches UEFI to its Advanced Mode GUI, whereupon advanced users can choose it as their default GUI by selecting Advance Mode near the bottom of the Advanced menu.

ASRock OC Tweaker provides factory-programmed overclocking profiles from 4.5GHz to 4.8GHz at default to 1.39V CPU core. All of the factory overclocks use AVX offsets that drop the CPU frequency to 4.3GHz, regardless of the voltage used.

Normally capable of 4.8GHz at 1.30V, our CPU was only completely stable at frequencies up to 4.6GHz on the Z370M Pro4. Rather than crashing Prime95 threads, the board allowed our least-stable core to drop its load level to less than 10% when its frequency was pushed any further.

Improved performance is the point of overclocking, but the Z370M Pro4 used such slow advanced memory settings as to reduce performance whenever we increased its data rate beyond XMP specification. That’s not a big problem for our DDR4-3866, but anyone hoping to push cheaper modules extra hard might end up in a performance hole.

While the board’s overclocking profiles sets Load-Line Calibration to its Level 2 setting, we found the Level 3 setting stayed far closer to our intended 1.30V CPU core setting when we applied heavy software loads. The board also added 22 millivolts to any DRAM voltage we picked, forcing us to choose its 1.330V setting to maintain testing consistency.

ASRock’s Advanced Mode GUI adds UEFI Tech Service to its Tools menu, which allows users to send email directly to ASRock tech support from firmware. Reading the response will require the user to access their email from an actual client, however.

In addition to the Fan-Tastic Tuning menu’s sliders, uses can create custom temperature-to-RPM (revolutions per minute) fan slopes using math. The Z370M Pro4’s four fan headers include one 3-pin with voltage control and four PWM without voltage control, as providing both modes to every fan header would have increased the board’s cost.