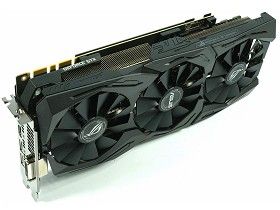 In the end, Asus earns a purchase recommendation for its factory-overclocked performance, quiet thermal solution, moderate weight, and reasonable price. The sub-optimal VRM cooling could be improved, but you shouldn't encounter any show-stopping issues as a result of the hot-spots. We also like that Asus enables this board's strengths without adding a ton of heft. Some of the company's competitors need much bigger sinks to achieve similar performance.

The Strix cooler sitting on top of that PCA features a lot more surface area though, since it doesn't need to worry about facilitating hybrid air/liquid-cooling. This is a more purpose-built design. And while its default clock rates aren't as high, the Strix card's price tag is lower than what you'll pay for an ROG Poseidon.

Apparently, DirectCU is old news. The slide below is an exploded view of Asus' thermal solution. It's rife with marketing buzzwords, but does a good job of illustrating how the card is put together.

Since the actual performance of any third-party card depends on the GPU Boost frequency it can sustain, and thus on cooling, power limits, and processor quality, any review that relies on bar charts is little more than a snapshot of a single specimen. That's why we're putting our emphasis on the actual implementation of each model. To that end, a lot of equipment goes into thoroughly documenting a graphics card's behaviors. If you'd like a peek at what goes into such an evaluation, check out our Nvidia GeForce GTX 1080 Ti 11GB Review. It makes for a good baseline on which Asus builds.

The bundled extras are limited: you get a software DVD, a manual, and an eight-pin adapter. But of course, it's the GeForce GTX 1080 Ti inside that gamers are really after...

Asus does take care to make a good first impression. Still, the matte front cover is made of simple graphite-colored plastic. It's attractive enough, but probably won't turn any heads. The only highlights are the RGB lighting effects on the top and back.

The backplate is an aesthetic add-on, which is to say it doesn't improve this card's thermal performance. A back-lit ROG logo does add a bit of visual flair back there, though.

Both of this card's eight-pin power connectors are rotated 180° to keep them from interfering with the heat sink. And a logo up top is back-lit as well. Its color can be customized using Asus' bundled software.

Vertically-oriented cooling fins guide heated air down towards your motherboard and out, likely at the side wall of your case.

Display outputs include two DP 1.4-ready connectors, a pair of HDMI interfaces (good for VR HMDs), and a dual-link DVI output. Any four of those can be used simultaneously in multi-monitor configurations.

A GPU-Z screenshot provides the most pertinent technical information, even if the GPU Boost values we observed were much higher than Asus' official specifications.

We explained our test system and methodology in How We Test Graphics Cards. If you want to learn more about the procedures we're using in today's review, have a look at that story. In the time since it was published, we also upgraded our CPU and cooling system to rule out any possible host processing bottlenecks.

A short summary in table-form to provide a quick overview:

Next Page Board & Power Supply
20 Comments Comment from the forums