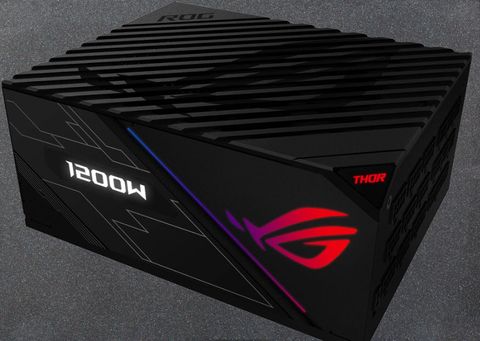 The Rog Thor 1200W is a good fit for enthusiast users requiring lots of power and silent operation. You won't find a quieter PSU in this capacity range. And the OLED screen further sets this PSU apart from the competition.

The ROG Thor 1200W achieves good performance in all areas and besides that, it is the quietest PSU in its wattage category achieving an impressive LAMBDA-A+ (15-20 dB[A] overall noise output) certification in the Cybenetics scale.

Asus teamed up with Seasonic for its latest high-end PSU line, and the results are very promising. The embedded OLED screen provides real-time power draw data and there is also addressable RGB lighting and Aura Sync compatibility, for those who want their power supply to look fancy. The price that Asus asks for it is high but fair, given the product's features. The main competitors of Asus' high-end offering are the similar capacity Seasonic Prime Platinum and the Corsair AX1200i. The latter, despite its age, is still a worthy adversary.

Asus makes several different types of components, so it makes sense for the company to enter the PSU market. But since the cost of developing a PSU from the scratch is huge, the company decided to team up with Seasonic and modify its Prime and Focus platforms, for the Rog Thor 1200W and 850W models respectively. Here we'll be taking a good look at the strongest Thor unit, which looks to be a heavily modified Seasonic Prime Platinum model. We'll investigate not just the internals, but take a close look at the external design as well. The Thor units have nice aesthetics, addressable RGB lighting, and an impressive OLED screen. The latter really sets this unit apart from the competition, although it only provides power draw data and not DC wattage information.

The amount of provided cables and connectors here is impressive! Besides two EPS connectors, the unit also has eight PCIe cables with four them being installed on dedicated cables. Moreover, you will find twelve SATA and a pair of SATA 3.3-compatible connectors, supporting the Power Disable function. In the latter the 3.3V rail is absent from the SATA connectors, since it doesn't exist on the four-pin Molex connector responsible for feeding them with power.

The only problems that we find here are the short distances between the peripheral connectors and the use of 18AWG gauges in the ATX, EPS and PCIe cables. Normally, in large-capacity units like this one, 16AWG gauges should be used for lower voltage drops under high loads.

Asus asked Seasonic for a number of modifications on the Prime Platinum platform, with the most important being the installation of a micro-controller, which aside from providing a digital interface is also responsible for the circuit that provides the power draw data. All heatsinks have been replaced with larger ones for this Asus model, in order to allow for decreased airflow leading to reduced acoustic noise.

The majority of PSU manufacturers try to reduce the size of the heatsinks in order to save money, something that demands more-aggressive fan speed profiles. But Asus chose a different route, making the Rog Thor 1200W one of the quietest units in this category.

All components used in this platform are of high quality, and what particularly makes a good impression is the ball-bearing fan, which is much more heat-tolerant compared to FDB fans. FDB fans generally feature a quieter operation, and this is what makes this unit unique. Even with a noisier DBB fan, the Thor manages to achieve very low overall noise output.