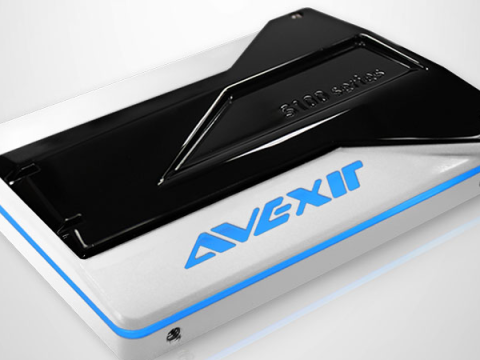 Avexir put great effort into making the S100 SSD look good, but the company doesn't have a lot of experience with SSDs. The S100 could have been so much more. Instead, it became the kind of product you want to discontinue and remove from the website entirely. I doubt we will ever see a performance leading SSD from the company, but we hope better component selection can lead to competitive mainstream products in the future.

The Avexir S100 has been on our radar for quite a while. Avexir first introduced the S100 to the world on the company's Facebook page in the form of an image with the LEDs shining, and a few weeks later the company released CAD-generated concept images. The first real product image came from a crowdfunding effort that we wrote about here.

Avexir touts the S100 as the first SSD series with LED "breathing" effects. To our knowledge, this is the first SSD that features LED lighting, but it's not a feature for everyone. The company takes component lighting to a new level; many of the Avexir memory products use LEDs to such a degree that you purchase the products for the lighting just as much the memory. The S100 lighting isn't as prominent as some of the other products from the Avexir portfolio.

The lighting effect has a bit of a boyish charm to it, which makes the drive itself look really good, but that's the only real positive feature. The premium design effort made this drive much taller than competing SSDs, so it is outside of the 7mm Z-height (thickness) specification. The drive also uses an older flash processor from JMicron that has a difficult time competing with modern TLC-based SSDs from other manufacturers.

Avexir released the S100 series in 120GB, 240GB and 480GB capacities. At the heart of each SSD is a JMicron JMF670H controller. Last year we wrote a detailed look at the controller with several different types of flash and discussed its future in the market. For the most part, the JMF670H controller has come and gone. All of the major SSD manufacturers have replaced JMicron controllers with Silicon Motion, Inc.'s SM2256, SM2258 or Phison's S10.

Avexir chose Micron's L95B 16nm asynchronous MLC flash for the S100. Many entry-level SSDs used asynchronous flash during the SandForce Era, but it still occasionally appears in our reviews with low-cost products. Asynchronous flash suffers a lower write speed than synchronous multi-level cell flash, even if the fab manufactures it on the same process node.

Users should only purchase this SSD for desktop use. The extra design aesthetics that lend the S100 its unique look also add to the thickness of the SSD. Most modern SATA SSDs are 7mm tall, and many new notebooks and Ultrabooks require the slim design. The S100 is 14mm tall, which is twice the standard height of most modern SSDs.

We failed to find the Avexir S100 at online retailers at the usual outlets in the United States or Europe. At Computex, where Avexir hand-delivered our sample, the company told us the drive is for sale in Asia but we may see it ship worldwide in the future. Users know Avexir primarily for its memory products, but the S100 is only one of the three SSD series that it has brought to market.

The S100 240GB retails for roughly $100 in Taiwan, where it is widely available in computer malls. Unlike the US, where most shoppers order online, Taiwan has several PC-specific vertical shopping malls. Three years ago, I ventured to the largest mall, and it featured roughly 100 strip mall sized stores in an eight-story complex. The mall was bustling with activity as shoppers eyed components in glass cases, and there were even full systems on display that users could take for a test drive.

The S100 series sports a 3-year warranty that doesn't appear to have an endurance clause. The drives ship with a desktop adapter bracket, mounting screws and a nice SATA cable.

The Avexir ships in a full retail box and includes a rich accessory package, which is a rarity with most new SSDs. Avexir included a desktop adapter bracket, screws for mounting the SSD and a high-quality SATA cable.

If you are shopping for this SSD, you are likely more concerned with the look of the drive than its performance. The Avexir logo on top of the SSD, and the plastic on the edge, light up with a slight pulse-like glow. Avexir sells the drive in five fixed colors. Those include green, orange, red, white and blue. Users cannot change the colors after purchase, so be sure to order what you need the first time.

The lighting effect comes from LEDs embedded in a special plastic "Light Guide" channel. The light has a slight pulse to it rather than just a static, steady glow. The drive would complement any of Avexir's Raiden-Tube Plasma Lighting memory products in a PC.

Shoving a light board into an SSD requires a custom PCB and a dedicated connector for the lighting. I suspect this is what took Avexir so long to get the S100 to market. The drive uses a custom PCB with the JMicron JMF70H controller, Nanya DRAM and eight Micron 16nm MLC flash packages.

Next Page Benchmarks And Comparisons
16 Comments Comment from the forums