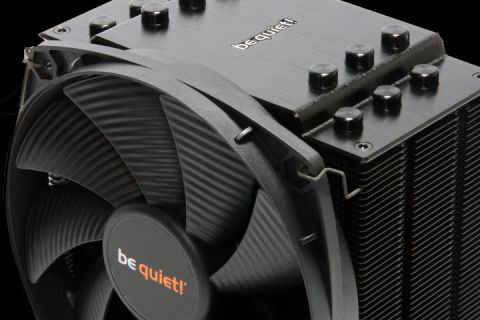 The Dark Rock 4 is an excellent, if spendy, heatpipe air cooler. It will be a majestic presence in any PC build designed to show it off.

For every flagship is a flanking vessel that rides shotgun to protect against predators--or, in this case, competitors. Along with its top-shelf Dark Rock Pro 4 CPU cooler, be quiet! sent us for review its newly designed "non-Pro" Dark Rock 4 CPU air cooler. The Dark Rocks represent the pinnacle of the be quiet! cooler line, all of them adorned with sleek industrial designs. The Dark Rock 4 slots in just below the Pro 4 in the company's pecking order.

This cooler comes topped with an anodized, brushed-aluminum cover plate. Each of the cooler's 6mm-diameter heatpipe ends pokes through the plate, covered by a black aluminum cap. A closer look at the aluminum fins themselves reveals that they are a bit thicker than the kind you will see on most heatpipe tower coolers, further emphasizing that be quiet!'s product engineering didn’t take shortcuts with this line. Once the cooler is installed, the top of the Dark Rock 4 is highly visible. Considering that the black plate is the one face that’s always going to be seen in a transparent-sided PC, we consider this a good thing.

The Dark Rock 4 includes the usual CPU-cooler accessory package: mounting hardware, screws, threaded standoffs, and washers, all bagged and carefully labeled. The cooler supports most current AMD and Intel sockets, with the big exception being AMD's Threadripper. A small syringe of thermal paste comes in the box, along with six printed installation manuals (English, Spanish, Polish, French, Russian, and German).

Hidden behind the packaging material is a long Phillips screwdriver with a magnetic head. By including everything you need in the box, be quiet! ensures that you aren’t hunting for tools or thermal compound, letting you get right down to installing.

Armed with a single 135 x 22mm QuietWings fan rated at 1400 RPM, this six-heatpipe tower cooler supports CPUs with TDP ratings up to 200W. The fan grips the cooler via a pair of wire clips that insert through the fan-mount holes and snap around cutouts in the sides of the tower's fins. Rubber anti-vibration strips for the fans run vertically along each side; these help reduce fan noise while also creating a snug fit between cooler and fan. (Pro tip: Removing the fan is much easier with a good pair of needle-nose pliers, used to pop the clips from the fan-mounting holes.)

Under a polished-aluminum mounting base, the Dark Rock 4 integrates its six copper heatpipes, suspended beneath the concave block of the cooling fins.

The rear of the Dark Rock 4 uses a different fin cutout design, which presumably promotes better airflow. Somewhat obscured by heatpipes, the top of the heatsink/mounting base provides a secure fitment for the cross bar that holds it in place.

When mounted properly, the Dark Rock 4 is centered over the top of the CPU, with only the attached fan providing an offset, based on where it is installed on the fin block. Like most midsize-to-large heatpipe tower coolers, the Dark Rock 4 might obstruct your memory DIMMs, at least in part, depending on the specific CPU socket in play and the height of the actual RAM modules.

Next Page Testing Results & Conclusion
8 Comments Comment from the forums