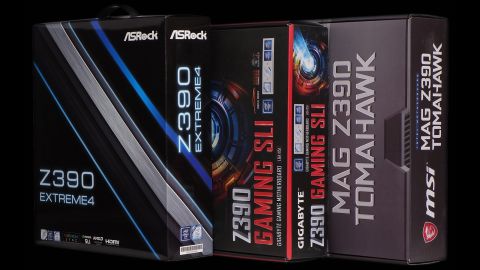 Cheap is a relative term when discussing overclockable LGA 1151 platforms: Since Intel locks down processor clocks when using anything less than a Z-series chipset, cheap platforms with beefed up voltage regulators are not an option. To be clear about what’s at stake here, even memory data rates above DDR4-2666 are locked out by Intel’s lower-model chipsets.

Because of these restrictions, frugal overclockers are left with a few sub-$160 Z390 models to choose from, and most of those have mid-sized voltage regulators that won’t push Intel’s top-of-the-line Core i9-9900K to its ultimate performance level. So we decided to see just how much performance we could squeeze out of a mid-range Core i5-9600K processor when using a budget Z390 motherboard. To find the best budget Z390 board, we tested three models: the ASRock Z390 Extreme4, Gigabyte Z390 Gaming SLI and the MSI Z390 Tomahawk.

Intel’s Z390 platform has two PCI Express 3.0 controllers, including a 16-lane primary controller on the CPU and a multifunction Platform Controller Hub (PCH is what Intel calls its “chipsets”). The CPU-based controller is designed to boost connected device performance by providing the shortest-possible pathways. Nearly any PCIe device(s) can be connected here, but only the Z390 PCH unlocks the CPU’s built-in PCIe bifurcation (ie, multi-device support). As with prior Z-series chipsets, the Z390 allows two graphics cards to run off the CPU’s PCIe controller in x8/x8 mode. Builders can even use that second slot for ultra-fast storage if they want, further splitting the CPU’s 16 lanes into x8/x4/x4 mode as desired.

The switches that enable a second slot to automatically take eight lanes when a card is detected and relinquish them when no card is installed add cost to the board, however, and some vendors exclude those under the assumption that frugal builders are just as unlikely to use a high-bandwidth device in the second slot as they are to use an expensive processor.

Manufacturers who chose not to implement CPU PCIe bifurcation must instead provision all additional slots with PCH pathways, and that’s where Intel’s HSIO (High Speed Input/Output) limits step in: These flexible pathways can be used for PCIe, USB 3.1/3.0, or SATA, and the Z390 has a total of 30. Things like NVMe M.2 interfaces (which normally use four PCIe lanes) cut deeply into those. The more interfaces a board has, the more likely that one will need to be turned off when turning another on. The PCH controller connects to the CPU via a DMI that has only PCIe 3.0 x4 bandwidth, so that even those interfaces that are functioning may underperform when another device is heavily loaded.

Let’s see where that leaves us:

Extreme4 models once represented the exact center of ASRock’s retail product portfolio, and the Z390 model certainly appears to carry on the traditions of its predecessors with a voltage regulator similar to the Z370 it replaces.  Unfortunately, its predecessors weren’t designed to carry the maximum continuous load of Intel’s eight-core Core i9-9900K CPU. After realizing that other boards at or near the Z390 Extreme4’s original $200 MSRP could do that, ASRock permanently reduced its price by 20%.

Since it descended from the mid-market, the Z390 Extreme4 includes extra external RGB control via two RGB and one addressable LED header. These, along with onboard lighting for the I/O connector and audio codec shrouds, and ground-effects style lighting under the PCH heat sink, are controlled via ASRock’s reputable Polychrome RGB application that also supports most brands of RGB memory. As the onboard lighting is simplified, multi-color patterns are only available to the memory and LED strips.

In addition to CPU PCIe bifurcation across two metal-reinforced slots, the Z390 Extreme4 boasts a third-party USB 3.1 Gen1 hub and SATA 6Gb/s controller. The USB hub allows ASRock to offer three 5Gb/s internal USB headers, two with traditional USB 3.0 dual-port connectors and one with a 3.1 Gen2 connector that can interface the front-panel Type-C ports of modern high-end cases at half the expected bandwidth. Meanwhile, the extra SATA controller allowed ASRock to expand its port count from six to eight.

Unfortunately, users who want to add a couple M.2 drives to the onboard slots will end up losing four of those SATA ports due to shared resources. And while CPU PCIe bifurcation would allow builders to instead put those drives on a PCIe x8 adapter, the board doesn’t include one of those. It does include a legacy High-Bandwidth SLI bridge, which could make this the perfect board to support a CPU upgrade for users who would like to carry forward their older cards and SATA drives.

With a full inch (~25mm) less depth than the ATX standard, Gigabyte’s Z390 Gaming SLI is the smallest board in our roundup, and similarly light on features: It has the switches to allow CPU bifurcation, onboard RGB lighting, and a single RGB cable header. That’s it.

The board’s installation kit doesn’t even include a legacy high-bandwidth SLI bridge to satisfy the upgrade market, unlike the ASRock sample, though both motherboards are SLI certified.

Even the RGB lighting it has is limited to single-color schemes with no DRAM LED synchronization, as the board doesn’t have the proper controller for Gigabyte’s famed RGB Fusion and is stuck instead with its scantly-featured Ambient LED single-color control. But at least buyers get to pick the color.

On the other hand, the Gaming SLI’s light feature set means that the only shared resource is the SATA connection between Port 0 and one of the M.2 slots. That’s not even an issue for anyone using a modern NVMe drive, so upgraders who skipped over SATA M.2 drives in their SATA to NVMe transition should be set.

Even though most budget-price motherboard buyers won’t spend the big cash for a Core i9-9900K, we realize that there are a few who will. Gigabyte’s sample is the only model in today’s roundup that can continuously run that eight-core, sixteen-thread CPU at its highest Intel Turbo Boost ratios, and we even issued an award for that in its review. But today’s focus on the Core i5-9600K’s lighter power load means that the more-capacious voltage regulator can’t be counted as heavily as an added feature.

MSI is the only manufacturer to exclude CPU PCIe bifurcation for the sake of cost, connecting all of the CPU’s lanes to the Z390 Tomahawk’s first slot x16 slot and four of the PCH’s lanes to the second PCIe x16 slot, leaving its third x16 slot with only a single lane.

Since the PCH also hosts both M.2 storage slots with four lanes each, four USB 3.1 Gen2 ports, four USB 3.0 ports via internal headers, all six SATA ports, two PCIe x1 slots and two Gigabit Ethernet controllers, the design leans heavily on shared resources. Each M.2 slot steals the HSIO from two SATA ports for example, so that a pair of M.2 cards can limit the board’s SATA support to a mere two drives. This also leads to the situation where the four-lane x16 slot is competing with each of the two four-lane M.2 slots and every other device except the graphics card for the same four lanes of bandwidth between the PCH and CPU.

MSI splits the difference between ASRock’s three light-strip headers (2 RGB, one Addressable LED) and Gigabyte’s one (RGB), by providing one RGB and one Addressable LED header. The Tomahawk’s onboard lighting is limited to just a ground-effects style row of LEDs under the motherboard’s front edge, and another row under the front edge of its PCH heat sink. The software is far less limited, as it had no trouble addressing our memory’s RGB lighting.

The second Gigabit Ethernet controller is the only extra feature that noticeably differentiates the Tomahawk from its competitors. All three boards promoted the same combination of heat sinks and single M.2 heat spreader, as well as the Z390-standard of unlocked CPU and DRAM frequencies. Conversely, this is the only model in today’s comparison to not offer CPU PCIe bifurcation, and the only model to use Realtek’s decade-old ALC892 rather than its modern ALC1220 audio codec.