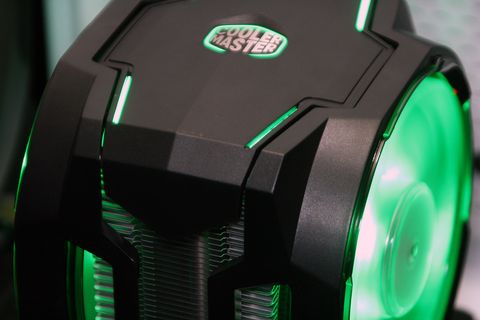 The MasterAir MA610P is a moderately priced, RGB-lit air cooler with dashing good looks and whisper-quiet operation. If you're looking for maximum cooling performance for the money, though, consider other alternatives.

What makes for a prime air cooler that impresses with its looks as much as with its cooling performance? Too often, air coolers sway to one extreme or the other.

Big air coolers are known for their dominating presence mounted atop PC motherboards, sporting large fans, complex cooling towers, and gleaming, serpentine heatpipes that seemingly grow out of the processors they are designed to cool. We are seeing new models making use of RGB-color-controlled lighting that is typically compatible with four-pin RGB-capable motherboards to provide quiet operation while allowing a cascade of 16.7 million colors. Your chosen hue glows from under the cooling shroud, around and through the cooling tower fins, emanating brightly from each fan hub.

Like many of Cooler Master's recent products, its MasterAir MA610P has a sleek, inviting design and a unique ducting shell that encases both cooling fans and much of the cooler itself, when mounted. The heatpipes and the fins of the cooling tower are left unpainted, showing the metallic contrast of bright copper and the muted sheen of aluminum. As a whole, this cooler was designed to look great, and it hits that mark.

The Cooler Master MA610P comes equipped to support most modern sockets for both AMD and Intel, which means there is an ample supply of mounting hardware and bracket-ry included. Cooler Master also provides a small syringe of its Mastergel Pro thermal compound, an RGB Molex power adapter, and an RGB control module for those who may not have a motherboard with a four-pin RGB connector.

The cooler's fans and their mounts create a "clamshell" around the cooling tower itself, clamping onto either side of the cooling fins and snapping the dual MasterFan 120 AB fans into position. For RGB color control, each fan couples to a central splitter within the cooling tower, which also provides illumination of the Cooler Master crest on the top cover.

A single four-pin standard RGB header allows for connectivity with an RGB-supporting motherboard, or it can be connected directly with the included color control module for basic operation. An included fan splitter allows both cooling fans to be controlled using a single four-pin PWM header.

The cooler makes use of six direct-contact copper heatpipes (each of them 6mm in diameter) and an integrated aluminum block to provide mounting support and conductivity of heat off of the CPU. The milling of the heatpipes and block is slightly granular, not polished, and it extends lengthwise down the heatpipes.

The cooler's base block itself stands approximately an inch tall and is designed also to serve as a heatsink, milled with deep fin channels. Mounting brackets for the appropriate CPU socket are secured through the ears of the block (using small screws), one on each side of the heatpipes. Usually, we see this integrated mounting block simply existing as a flat, milled block of aluminum, providing thermal mass and a way for the cooler to be mounted securely. Here, Cooler Master has designed it into a separate heatsink.